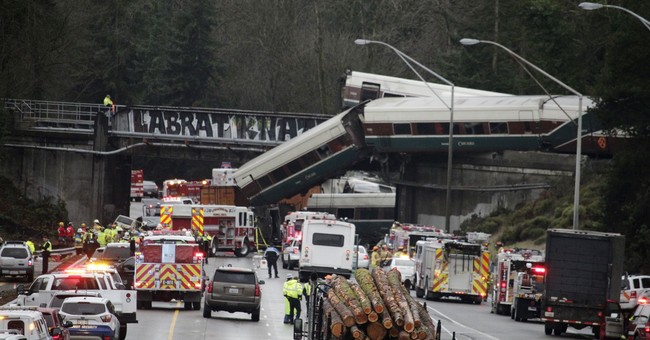 An Amtrak train derailed on an overpass in Washington state Monday morning. At least two train cars fell onto the highway beneath the overpass. The Associated Press is now reporting that there are at least six fatalities.

The train accident that just occurred in DuPont, WA shows more than ever why our soon to be submitted infrastructure plan must be approved quickly. Seven trillion dollars spent in the Middle East while our roads, bridges, tunnels, railways (and more) crumble! Not for long!

My thoughts and prayers are with everyone involved in the train accident in DuPont, Washington. Thank you to all of our wonderful First Responders who are on the scene. We are currently monitoring here at the White House.

The train was making its first run along a new route when the derailment occurred. Seventy-eight passengers and five crew members were aboard at the time, according to Amtrak.

"We had just passed the city of DuPont and it seemed like we were going around a curve," passenger Chris Karnes told CBS News. "And all of a sudden, we felt this rocking and creaking noise, and then all of a sudden it felt like we were heading down a hill, and the next thing that we know, we're being slammed into the front of our seats, and the windows are breaking, and then we stop, and there's water that's gushing out of the top of the train and all the lights go out and people are screaming."

"The tracks for this line were supposed to be upgraded to be able to handle higher speeds," he added. "So, I'm not sure what happened at this juncture."

Karnes said that at least seven cars derailed and the emergency doors were not functioning properly, so passengers kicked out train windows to exit.

This was what all the passengers received before the @Amtrak ride. On the very first day, the very first ride, the train derailed. pic.twitter.com/YLgtDwrHnH

New images from the scene of Amtrak train derailment near Tacoma, Washington.