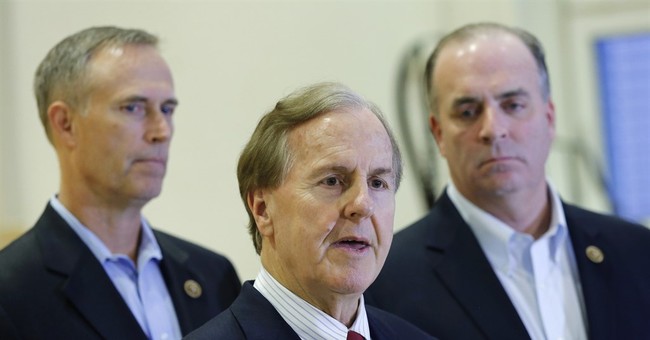 Rep. Robert Pittenger (R-NC) introduced the No Abortion Bonds Act Wednesday, along with over 50 of his colleagues in the House, to close a loophole by which state, city, and county governments can and have issued tax-free bonds for the construction of abortion clinics.

“These tax-free bonds are intended to finance schools, hospitals, and infrastructure, not abortion clinics,” Rep. Pittenger explained in a speech on the House floor. “This legislation applies the spirit of the Hyde Amendment to the tax code, by preventing tax-free bonds from going to abortion providers.”

The Hyde Amendment is a spending rider that prohibits taxpayer funding of abortions except in cases of rape, incest or life of the mother, recognizing that many taxpayers might have moral objections to their money being used for abortions. It has passed Congress since 1976 without controversy.

Pittenger pointed out instances of local governments giving tax-free bonds for the construction of abortion clinics.

“State and local governments are allowed to finance construction of schools, roads, and hospitals with special bonds exempt from federal tax,” he explained. “These tax breaks for the investors, which cost the federal government billions in revenue, lead to lower costs for the borrower. Federal taxpayers therefore subsidize the project, in addition to being ultimately responsible for the loan should the borrower fail to pay.”

“These tax free bonds are intended to finance schools, hospitals, infrastructure, not abortion clinics,” he emphasized.

Pittenger’s bill would remove the tax-exempt status of any bond that goes to an abortion provider or clinic.

According to his office, the bill “includes exemption for clinics that only perform abortions in cases of rape, incest, or danger to the life of the mother,” and “includes common sense exemption for hospitals.”

In an op-ed for The Charlotte Observer, Pittenger argues that “even if you don’t agree with my longstanding commitment to the ‘right to life’ for those who cannot speak for themselves, the majority of Americans concur that using federal tax-exempt bonds to subsidize abortion clinics is improper. Closing this loophole is in line with 40 years of bipartisan agreement on the Hyde Amendment.”

He cites a 2016 Marist poll which found that 62 percent of Americans, even those who call themselves pro-choice, are opposed to taxpayer funding of abortion.