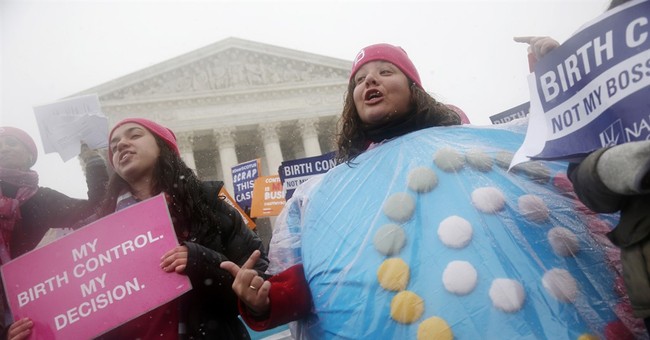 The American Civil Liberties Union (ACLU) filed a lawsuit Friday against the Trump administration over new rules, announced just hours before the lawsuit, that allow employers to be exempted from the Obamacare contraceptive mandate if they have religious or moral objections.

The lawsuit was filed on behalf of members of the ACLU and the Service Employee International Union-United Health Care Workers West (SEIU-UHW), one of the largest unions of hospital workers in the western United States which has more than 93,000 members.

The ACLU argues in the lawsuit that the rules violate the Establishment Clause and the Equal Protection Clause of the Constitution by “authorizing and promoting religiously motivated and other discrimination against women seeking reproductive health care.”

“The Trump Administration is forcing women to pay for their boss’s religious beliefs,” ACLU senior staff attorney Brigitte Amiri said in a statement Friday. “We’re filing this lawsuit because the federal government cannot authorize discrimination against women in the name of religion or otherwise.”

The ACLU tweeted an announcement that they are suing the administration with a graphic that read, “Only you should have the power to make decisions about your birth control.”

"No American should be forced to violate his or her own conscience in order to abide by the laws and regulations governing our healthcare system," HHS press secretary Caitlin Oakley said in a statement shortly after the rule was announced. "Today's actions affirm the Trump administration's commitment to upholding the freedoms afforded all Americans under our Constitution."

Many religious organizations including the Little Sisters of the Poor, that had been involved in a five-year long lawsuit against the Obama administration over the contraceptive mandate, praised Trump’s move.

Mark Rienzi, senior counsel at the Becket Fund for religious liberty and the lead attorney for the Little Sisters of the Poor, commented that “HHS has issued a balanced rule that respects all sides– it keeps the contraceptive mandate in place for most employers and now provides a religious exemption. The Little Sisters still need to get final relief in court, which should be easy now that the government admits it broke the law.”

Share this on Facebook
Tweet
Dem Pollster Sounds the Alarm: 'We Have a Problem'
Leah Barkoukis
Tucker Carlson Pinpoints Why the Omicron Variant Is So Significant
Leah Barkoukis
Biden Explains Who He Really Thinks Is President
Katie Pavlich
Germany Is Doing a Very Dark Historical Throwback Concerning Its COVID Vaccine Policy
Matt Vespa
It Looks Like Government Will Be Funded After All: Congress Averts Shutdown By Passing Continuing Resolution
Rebecca Downs
It's Not Just Symone Sanders: Kamala Harris is Losing Even More Staffers
Rebecca Downs
CARTOONS | Al Goodwyn
View Cartoon
Most Popular