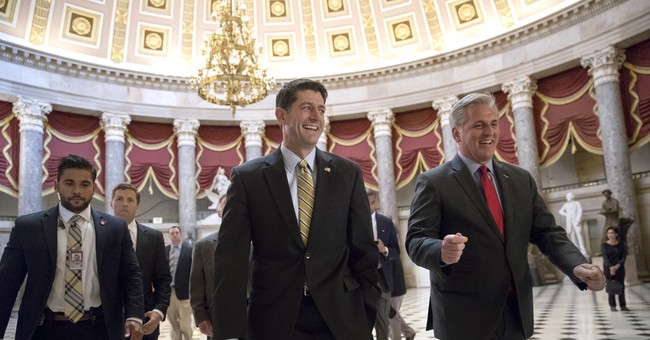 Washington, D.C. - House Majority Leader Kevin McCarthy (R-CA) hosted a reception in his office Tuesday evening with various pro-life leaders and GOP lawmakers to celebrate the passage of the Pain Capable Unborn Child Protection Act, which passed the House in a 237-189 vote that was mostly along party lines with three Democrats that voted for the bill.

The bill would ban abortion at 20 weeks, the point at which science increasingly shows that unborn children feel pain.

Leader McCarthy thanked all of those gathered for their support of and advocacy for the legislation. He also thanked his colleagues, noting that it was wonderful to see so many of them lining up to testify about the importance of the legislation on the House floor.

He particularly thanked Rep. Karen Handel (R-GA) who had given a personal, moving testimony just before the vote about the birth of her sister.

“It is extraordinarily heartbreaking when an unborn baby is diagnosed with a severe and life threatening abnormality; still, that baby deserves a right to life and right to dignity,” she said. “My sister was born with no esophagus and given little hope to live and by the grace of God and a miracle within just weeks of her birth a new technology, a new treatment came forward and today she is a proud mother of my two nieces.”

Opponents of the bill argue that late-term 20 week abortions should be permitted in case of severe fetal abnormalities which are sometimes caught late in the pregnancy.

McCarthy led a round of applause for the bill's sponsor Rep. Trent Franks (R-AZ) who was present with other strong advocates of the bill, including Reps Diane Black (R-TN), Chris Smith (R-N.J.), and Vicky Hartzler (R-MO).

He also mentioned Micah Pickering, a five-year-old boy born prematurely at 20 weeks, who had been at his side when he initially announced the legislation last week. He said Micah had "put a face" to the legislation and displayed a blue bracelet that Micah had given him which read ‘Miracles for Micah.’

In his speech on the floor just prior to the vote, McCarthy emphasized that “we should care for the marginalized—for those who have their very humanity denied even as their noses, eyes, ears, heartbeats, and every movement are visible testaments of their life."

“We will never know these Micahs,” he said. “Our lives are poorer because their lives were cut short. But there are more. Instead of pain—instead of pain—we should fill them with love.”

At the reception, one attendee emphasized that they can really celebrate when Micah is in the Rose Garden, as Trump signs the bill into law.

President Trump promised to sign the bill on the campaign trail and the White House released a statement Monday formally backing it. However, the bill will first have to be taken up and passed by the Senate. The bill will face some tough odds in the Senate as it needs 60 votes for passage and Republicans hold only 52 seats.

McCarthy said he was hopeful that the bill would pass the Senate, thanking his friend Sen. James Lankford (R-OK), who was also present, for his continued support of the measure.

“Today’s vote to pass the Pain-Capable Unborn Child Protection Act was a win for basic human decency,” Marjorie Dannenfelser said in a statement.“Thanks to Leader McCarthy and Rep. Trent Franks, we are one crucial step closer to protecting thousands of unborn children nationwide from painful late-term abortions. It was also especially fitting that strong pro-life women like Rep. Karen Handel and Rep. Liz Cheney were at the forefront to introduce the bill and lead debate. Polls consistently show that large, diverse majorities of Americans support this legislation – women in higher numbers than men.”

“The United States is one of only seven nations in the world that allow children in the womb to be killed for any reason up until the moment of birth, putting us in the company of China and North Korea,” she pointed out. “Our nation does not belong in that disgraceful club. Momentum has long been building for national legislation to protect babies at five months. Twenty states have passed their own Pain-Capable Unborn Child Protection Acts.”

"The March for Life stands with House Majority Leader Kevin McCarthy and everyone who voted to pass Micah’s Law (the Pain Capable Unborn Child Protection Act),” Jeanne Mancini said. “This common sense policy that would limit abortion to five months reflects the consensus shared by eight out of ten Americans - abortion should have real legal limits. This bill will not only save between 11,000-18,000 lives a year, but will serve to educate the public on the humanity of the unborn person and affirm the science of fetal pain early in development.

“We now ask the Senate to also vote on this legislation so that President Trump can fulfill his promise of signing this bill into law," she added.

“Abortion is the human rights issue of our time,” Penny Nance said in a statement. “Regardless of where one comes down on the issue of life, it is undeniable that an unborn child can feel pain at 20 weeks’ gestation. Not only does this legislation protect unborn children, but it also protects women who face substantially higher risk of complications from a late-term abortion.”