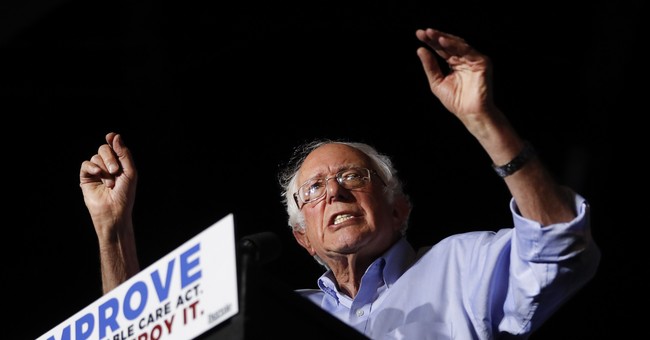 This proposal would essentially eliminate the longstanding Hyde Amendment ban on federal funding of most abortions, which has been in place for over 40 years.

The bill deals specifically with the Hyde amendment, explicitly stating that “RESTRICTIONS SHALL NOT APPLY. Any other provision of law in effect on the date of enactment of this Act restricting the use of Federal funds for any reproductive health service shall not apply.”

This reflects a larger shift among Democrats to the left on this issue. In 2016, Democrats called for an end to Hyde in their party platform, a shift so radical that some Democrats condemned it.

Rewire News said Sanders’s bill would “spur perhaps the greatest expansion in access to reproductive health care in this country in the last century.”

A Sanders aide told Quartz that the abortion language in the bill “was not an afterthought.”

Abortion groups are hailing the legislation as a “big win.”

“Senator Sanders’ healthcare bill ends the debate and makes clear that reproductive healthcare, including abortion services, is a fundamental right—not just a privilege for the wealthy,” Ilyse Hogue of NARAL said in a statement. “The senator’s work to draft this legislation is a groundbreaking advancement for a simple truth: we will never solve our healthcare crisis until women have full access to reproductive services. The introduction of this bill is the culmination of significant work led by women of color, who suffer the most when contraception and abortion care are offered on a pay-to-play basis.”

Destiny Lopez, co-director of All Above All, a group dedicated to ending the Hyde Amendment, applauded the measure.

“We applaud Senator Sanders and the bill’s co-sponsors for this BOLD vision for health coverage,” she said. “This bill recognizes what people across the country already know: that health insurance plans should cover the full range of pregnancy-related care, including abortion.”

Planned Parenthood’s Vice President of Public Policy and Government Affairs said it was a “refreshing change to see a health care proposal coming out of Congress that explicitly takes women’s health into consideration.”

The extreme abortion coverage proposal is an interesting twist given that Sanders recently drew controversy and censure from the left by saying that abortion should not be a litmus test for the Democratic party.

The Medicare-for-all abortion proposal is also not in line with the views of most Americans. Recent polling found that 61 percent of Americans oppose taxpayer-funded abortions in the United States.