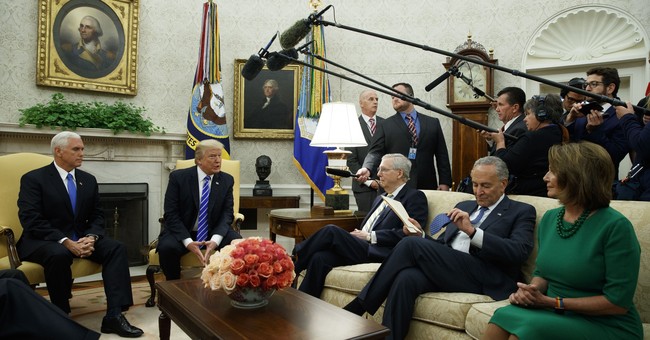 "The president listened to the arguments,” Senate Minority Leader Chuck Schumer told reporters, “to his credit, he went with the better argument."

“Today was a good day in a generally very partisan town,” Schumer added.

“In the meeting, the President and Congressional leadership agreed to pass aid for Harvey, an extension of the debt limit, and a continuing resolution both to December 15, all together,” Schumer said in a joint statement with House Minority Leader Nancy Pelosi. “Both sides have every intention of avoiding default in December and look forward to working together on the many issues before us.”

President Trump undercut Republican leaders who were opposed to the deal. Republicans would have preferred a longer debt ceiling extension to avoid giving added leverage to Democrats negotiating in December.

"We had a very good meeting with Nancy Pelosi and Chuck Schumer," Trump said while aboard Air Force One, without mentioning House Speaker Paul Ryan or Senate Majority Leader Mitch McConnell. "We agreed to a three-month extension on debt ceiling, which they consider to be sacred, very important."

Senate Majority Leader Mitch McConnell said he would add the three-month extension agreement to the Harvey relief bill coming to the Senate floor.

"His feeling was that we needed to come together, to not create a picture of divisiveness at a time of genuine national crisis," McConnell said of Trump. "And that was the rationale, I‘m confident, for his decision to agree to what I‘m going to be offering on the Senate floor.”

"I think that is ridiculous and disgraceful that they want to play politics with the debt ceiling at this moment when we have fellow citizens in need to respond to these hurricanes so that we do not strand them," he told reporters. "I think what the leaders, you just described, proposed is unworkable, and it could put in jeopardy the kind of hurricane response we need to have."

Senator Ben Sasse (R-NE) had a brief response to the deal.

The Pelosi-Schumer-Trump deal is bad.