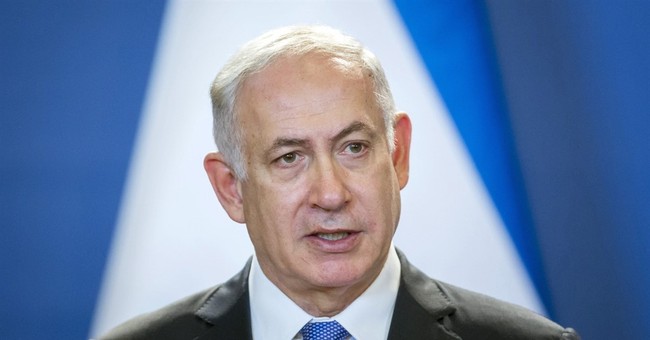 Israel’s Prime Minister Benjamin Netanyahu slammed the European Union’s “crazy” treatment of Israel and talked about how there was a “big problem” in the U.S. under Obama in remarks caught on a hot mic during a closed meeting with leaders of Poland, Hungary, the Czech Republic and Slovakia.

“The European Union is the only association of countries in the world that conditions the relations with Israel, that produces technology and every area, on political conditions. The only ones! Nobody does it,” Netanyahu said according to the Haaretz newspaper.

“I think that if I can suggest that what comes out of this meeting is your ability perhaps to communicate to your colleagues in other parts of Europe: help Europe – twice. Don't undermine that one Western country that defends European values and European interests and prevents,” he continued.

“I think Europe has to decide if it wants to live and thrive or if it wants to shrivel and disappear,” he emphasized. “I am not very politically correct. I know that’s a shock to some of you. It’s a joke. But the truth is the truth. Both about Europe’s security and Europe’s economic future. Both of these concerns mandate a different policy toward Israel.”

“We are part of the European culture,” he said. “Europe ends in Israel. East of Israel, there is no more Europe. We have no greater friends than the Christians who support Israel around the world. Not only the evangelists. If I go to Brazil, I'll be greeted there with more enthusiasm than at the Likud party center.”

Netanyahu went on to slam the Obama administration and their deal with Iran saying the position now is “stronger.”

“We had a big problem [in the U.S.],” he said. “I think it’s different now. Vis-a-vis Iran, there is a stronger position. The U.S. is more engaged in the region and conducting more bombings [in Syria]. It is a positive thing. I think we’re ok on ISIS. We’re not ok on Iran.”

Netanyahu also acknowledged that Israel has carried out dozens of attacks against Hezbollah arms convoys.

“We blocked the border not only in Egypt but in the Golan Heights,” he said. “We built the wall because there was a problem with ISIS and Iran trying to build a terror front there. I told Putin, when we see them transferring weapons to Hezbollah, we will hurt them. We did it dozens of times.”