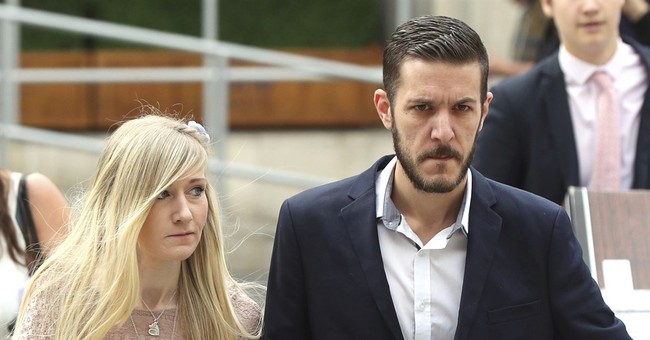 Chris Gard and Connie Yates, the parents of critically ill 11-month-old Charlie Gard who suffers from a rare genetic condition, stormed out of a hearing Thursday in which they were trying to make a medical case for an experimental treatment for their baby. Three British courts previously sided with the London Great Ormond Street Hospital’s decision to remove the baby’s life support against the parents’ wishes.

Charlie's parents stormed out of the court two hours into Thursday’s hearing after disagreeing with a comment by the judge claiming that they had said that they wouldn’t want to prolong the baby’s life in its present state, only if there was hope of improvement.

Yates interrupted the judge exclaiming, "I never said that!"

She and Gard then angrily stormed out and the court paused for lunch shortly after.

Yates and Gard did return to the courtroom after the lunch break.

The judge later apologized to the parents, telling them a transcript of what they had said had been found and they would not be misquoted, Sky News reported.

The judge claimed in his opening remarks that Charlie’s “welfare is the prime concern for all of us though we may approach it in different ways."

He said he didn’t think the hearing would finish Thursday, and that "if there is important new evidence that suggests my decision should be changed then I will change it."

Ahead of Thursday’s hearing, Chris Gard and Connie Yates released a statement to the press about their desperate fight to keep little Charlie alive.

“We are continuing to spend every moment, working around the clock to save our dear baby Charlie,” they said. “We’ve been requesting this specialized treatment since November, and never asked the hospital, Courts or anyone for anything – except for the permission to go. We’ve raised over £1.2 Million and have had invitations from specialized Doctors in the U.S. and Italy offer their ground-breaking treatment to us and are confident they can help little Charlie. We will continue to make the case for us to seek treatment for Charlie with Doctors that are actually specialized in Mitochondrial DNA depletion syndrome and we hope the Judge and the Courts will finally rule in favor of us seeking treatment elsewhere.”

The hospital has made a case that it's in Charlie's best interest to be removed from life support because they believe that the experimental treatment would not be beneficial and would only prolong his suffering. However, the hospital requested a new hearing after new medical evidence came to light showing an increased chance of the baby’s improvement with the experimental treatment.

During Thursday's hearing, the parents’ lawyer, Grant Armstrong, quoted an expert in the field saying there was a 10 percent chance of Charlie experiencing “meaningful improvement” as a result of the treatment.

Charlie Gard’s case drew an international public outcry against the hospital’s decision that included Pope Francis, President Trump, and Cher. President Trump and Pope Francis have extended offers of support to the family and two Congressman have introduced legislation to try to help bring baby Charlie to the U.S. for treatment.

There are numerous petitions circulating to give Charlie Gard a second chance with the experimental treatment. CitizenGo’s petition has already reached over 450,000 signatures.