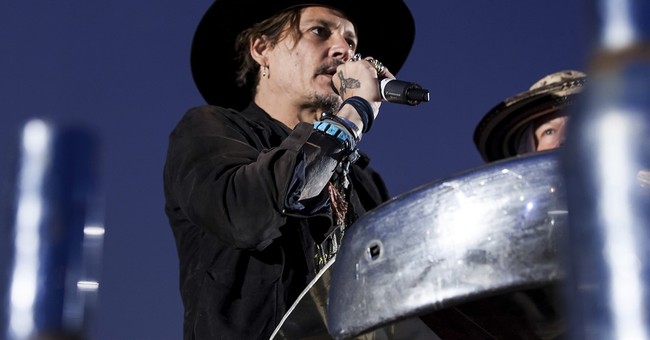 Appearing at the Glastonbury Music Festival Thursday evening, Johnny Depp asked the audience, “When was the last time an actor assassinated a president?"

Depp was apparently alluding to the assassination of President Lincoln by actor John Wilkes Booth in Ford’s Theatre in 1865.

"I'm not insinuating anything,” he added, “by the way this will be in the press and it will be horrible.”

As the crowd cheered, Depp said: "I want to clarify I'm not an actor, I lie for a living. However, it’s been awhile and maybe it’s time.”

Depp introduced the topic by saying he thinks "Trump needs help," saying, "there are a lot of dark places he could go."

The Secret Service said in a statement that they were "aware of the comment in question. For security reasons, we cannot discuss specifically nor in general terms the means and methods of how we perform our protective responsibilities.”

Depp has never been a fan of Trump and called him a “brat” at an appearance last year.

“There's something created about him in the sense of bullydom. But what he is, I believe, is a brat," Depp said at the time, discussing his role portraying Trump in a Funny or Die movie.

The assassination joke comes at a particularly sensitive time following a gunman's targeting of GOP lawmakers at a Congressional baseball practice that seriously injured Rep. Steve Scalise (R-LA) who is still recovering in the hospital.

Celebrities seems to think threats on the president’s life are edgy and cool, judging by Kathy Griffin’s recent video depicting Trump’s severed head, which she later apologized for, and singer Moby’s recent music video in which a cartoon Trump is blown up.