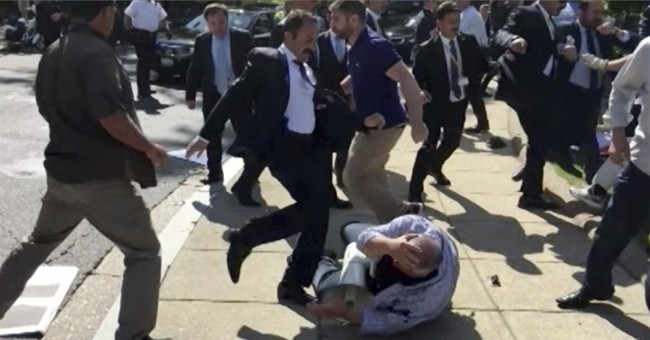 Law enforcement officials told The New York Times Wednesday that they will announce charges Thursday against a dozen members of Turkish President Recep Erdogan’s security detail over their violent attack on protestors in May outside the Turkish embassy.

An official told the Associated Press that “the DC police are expected to say that seven men are being charged for felonies, and another five for misdemeanors.”

Earlier Wednesday, D.C. police said that they have arrested two Americans already over the attack on protestors.

"Now that charges have been filed, the Department will weigh additional actions for the named individuals, as appropriate under relevant laws and regulations," a spokesperson for the State Department said of the arrests. "Any further steps will be responsive and proportional to the charges or arrests."

Erdogan’s bodyguards have become violent on several other occasions on U.S. soil. The Times noted, “In 2011, they took part in a fight at the United Nations that sent at least one security officer to the hospital. And last year, the police and members of Mr. Erdogan’s security team clashed with demonstrators outside the Brookings Institution in Washington.”