Rep. Williams:'We Saw Courage in the Face of Death' and 'Tomorrow We're Going to Play Baseball' 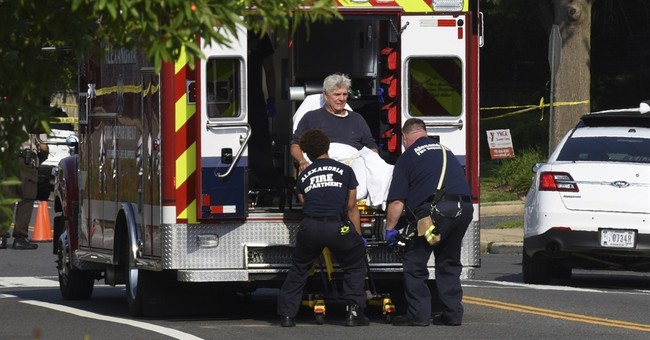 Rep. Roger Williams (R-TX) held a press conference Wednesday evening providing an eyewitness account of the shooting at the congressional baseball practice that morning and praising the heroic response of the Capitol police and his colleagues.

“We saw two people risk their lives to save the lives of others,” Williams said, “we saw courage in the face of death, and we saw examples why all Americans should be grateful every day for law enforcement officers around this country.”

“There could’ve easily been 25 deaths or more today. I think we had 25 team players and about 15 staff but Officers Griner and Bailey prevented that and my family will be forever grateful.”

Officers Crystal Griner and David Bailey were among the five injured after a gunman opened fire on congressmen during the practice. House Speaker Paul Ryan honored them in a floor speech this afternoon also emphasizing that many would’ve died if not for their presence.

Williams gave a chilling account to reporters of the shooting saying at first he thought “maybe it was the backfiring of a car” but when he heard the second and third shots "everybody yelled he’s got a gun run for cover and that’s what I did.”

Williams said he “ran to the first base dugout which is in the ground about 7 feet and I literally dove into that dugout be like diving I guess into a swimming pool with no water.”

“Zack Barth who works for me was shot while he was retrieving balls in the outfield when I got into the dugout it wasn’t ten seconds and Zack had come running from the outfield and he literally, we landed in each other’s arms,” Williams recalled. “He held me, I held him. Jeff Flake took his belt off and made a tourniquet around Zack’s leg to stop the bleeding.”

“There was a lot of heroes today among my friends,” he emphasized. “It’s something I will not forget. It seemed like it went forever. Police say they got here in about 3 or 4 minutes and I’m sure that’s the case but it was a long time, they say 60 shots were fired but without our Capitol Police who literally took a step forward when they didn’t have to, they could’ve took a step backwards, they stepped forward. They saved all of us out there, there is no question about it.”

Williams, who entered the press conference on crutches, was asked by reporters about his own injury.

He said it was an ankle, leg injury that occurred while he was diving into the dugout and he’d “be going back to Texas after the game tomorrow night to let my doctors see what they need to do as far as my knee and my leg.”

He also confirmed that his staffer Zack Barth will be fine and has been released from the hospital.

“We’re going to play, we need to play,” Williams said. “This is a game going on for over 100 years, it goes to charity and we need to play this baseball game and so I’m excited that we’ve decided to do that.”

As to the role he'll play in the game tomorrow, Williams said, "some of us are on the injured reserve list right now," adding, "if you're not sure which one I'll be, I'll be the one coaching third on crutches."

“I think it’s important because I think these people that want to destroy our lives and our livelihood here in America, they win if we give in,” he explained. “This is America the greatest country in the world, if you punch us we will punch back and we’re going to play baseball tomorrow.”

Tickets to the game tomorrow are available here and will benefit the Washington Literacy Center, The Boys and Girls Clubs of Greater Washington, and the Washington Nationals Dream Foundation.