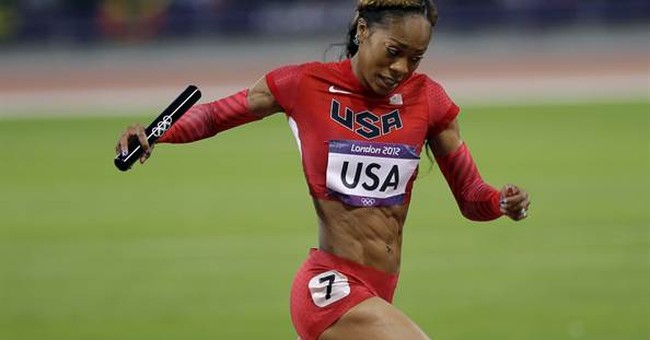 Two-time Olympic gold medalist Sanya Richards-Ross opened up about her decision to have an abortion just before the 2008 Beijing Olympics in her new memoir “Chasing Grace: What the Quarter Mile Has Taught Me about God and Life.”

She discovered she was pregnant just weeks before the Beijing games while she was still dating her now husband former NFL player, Aaron Ross.

"The culmination of a lifetime of work was right before me," Richards-Ross wrote. "In that moment, it seemed like no choice at all."

"The debate of when life begins swirled through my head, and the veil of a child out of wedlock at the prime of my career seemed unbearable," Richards-Ross said. "What would my sponsors, my family, my church, and my fans think of me?"

“Prioritizing athletic goals over the gift of life was the norm. It was all around me, but not until it was me did I realize many of these young women only wore a mask of indifference for something I can now testify requires deep thought and proper counsel,” she explained.

The abortion decision also strained her relationship with her now husband.

"Over the phone, we didn't go into details," she explains. "As if not saying it would alleviate some of the guilt and the shame."

Richards-Ross, who is expecting a child with her husband this summer, said: “I made a decision that broke me, and one from which I would not immediately heal.”

“Abortion would now forever be a part of my life,” she emphasized. “A scarlet letter I never thought I’d wear.”

She explained in a podcast interview that she’s telling her story for her own healing and “to tell people that you can come back from any decision no matter how hard it is to make… you can still have God with you on the journey.”

In an interview with Sports Illustrated, she revealed that abortion is prevalent in female track-and-field.

“The truth is it’s an issue that’s not really talked about, especially in sports, and a lot of young women have experienced this,” she said. “I literally don’t know another female track-and-field athlete who hasn’t had an abortion – and that’s sad.”

She hopes that her revelation “will open up some discussions, to helping especially a lot of young women who were in my situation not experience what I did.”

She explained that many track stars “don’t want to take the pill because you put water weight on.”

While abortion advocates often dismiss stories like Richards-Ross’s as anomalies, perhaps they should take their own advice and listen to the experiences of all the women who’ve actually had abortions, including the ones who regret that decision.