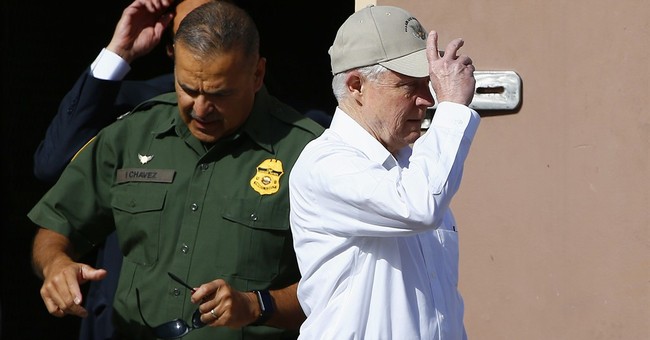 The Department of Homeland Security’s Office of the Inspector General (OIG) released a report Thursday which found that the Immigration and Customs Enforcement (ICE) deportation “does not effectively manage the supervision and deportation of non-detained aliens.”

The report highlighted that many deportation officers “reported overwhelming caseloads and difficulty fulfilling their responsibilities,” and said “ICE does not collect and analyze data about employee workloads to allocate staff judiciously and determine achievable caseloads.”

A deportation officer reported that “because of competing work responsibilities criminal background checks are not conducted every time a non-detained alien checks in with the field office.”

"You might work 18 hours a day, but you still won't get caught up," one deportation officer with a heavy caseload of non-detained immigrant cases told the OIG.

Another troubling example was an officer at one field office who reported that, due to the heavy workload, oversight is limited to “non-detained aliens in that geographic area that ICE had flagged as risks to national security.”

The ICE Enforcement and Removal Operations (ERO) responded to the report saying it is “currently examining staffing structures throughout the organization to inform future hiring that will implement the President's Executive Order 13768, Enhancing Public Safety in the Interior of the United States.”

They say this effort “along with ERO's evolving enforcement posture, will determine the future operational footprint for ERO's 24 field offices. This initiative is also aligned with ICE's project to complete a workforce staffing model that uses subject matter expertise and operational data to determine appropriate workforce staffing in positions and geographical areas.”

Acting ICE press secretary Jennifer D. Elzea agreed with the report’s recommendations, in a statement to NBC News, which include “a call to review staffing for detained and non-detained units,” she added that due to the scope of the recommendations, “the agency expects the changes to be implemented in early 2018.”

“ICE remains committed to implementing safeguards to ensure that its deportation operations are executed in a way that promotes public safety and protects our communities," Elzea said. "ICE continues to strengthen and improve relationships with state and local law enforcement partners and to work directly with both foreign governments and with other government entities to improve cooperation with countries with whom we have encountered challenges in the past regarding repatriating their nationals."