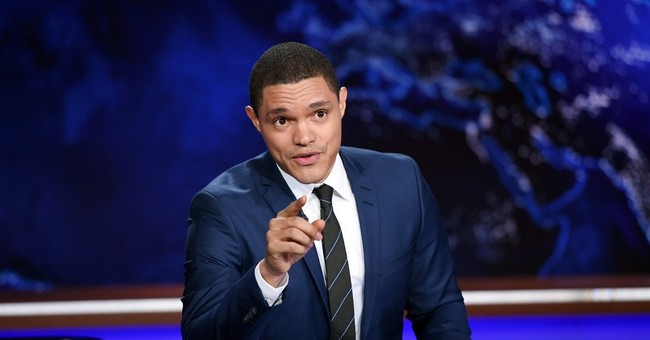 “So many conservative Republicans what do they do?” Noah asked. “They spend all their time bashing Muslims for how they treat women and yet they seem to be perfectly fine over here with Sharia Mike who’s going like no women alone with me one on one, nothing.”

“I understand it’s hard for people to see Mike Pence’s action as sexism but here’s a hypothetical: what if a female senator wanted to discuss legislation at dinner with Mike Pence, right,” Noah said, “He wouldn’t do it unless there’s a chaperone?”

Thank goodness women have Trevor Noah to point out instances of sexism. Never mind that women who worked with Pence for years have written articles defending his personal decision to respect his marriage in this way, arguing that it never held them back.

Noah then proceeded to make a series of off-color jokes speculating as to some of the reasons Pence might not want to be alone with women other than his wife.

“Is he afraid that they’ll just start banging in the middle of dinner?” Noah speculated. “How irresistible does Mike Pence think he is? Is he just sitting there like there’s no way we can be in this room and not have sex. How do you think my hair got so white? I f*cked the color out of it.”

Judging by media reactions on Twitter, Noah is not the only person who is struggling to understand how Pence could set boundaries to honor his marriage that aren’t the equivalent of Sharia law.

Sincere question. How is this different from extreme repressive interpretations of Islam ("Sharia Law!") mocked by people like Mike Pence