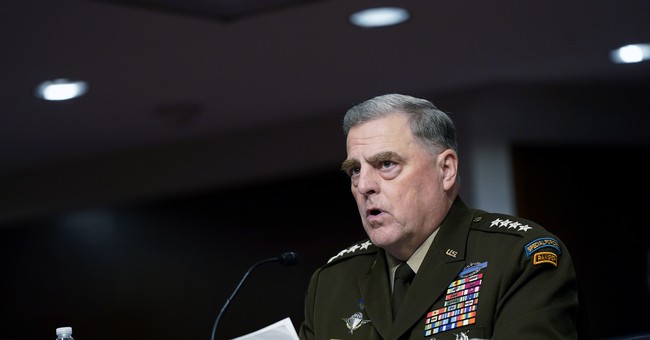 Chairman of the Joint Chiefs of Staff Gen. Mark Milley said earlier this week that it is "possible" the chaotic U.S. evacuation from Afghanistan last year led to Russian President Vladimir Putin's decision to invade Ukraine.

During a Senate Armed Services Committee hearing on Thursday, Milley explained to Tennessee GOP Sen. Marsha Blackburn that he cannot confirm whether the Afghanistan debacle prompted Russia's invasion but conceded that it is a possibility.

Asked by Blackburn if the Afghanistan withdrawal played a part in Russia invading Ukraine, Milley said, "From the intelligence I've read, it's not clear. I think it certainly is possible, but I also know that Putin had aims on Ukraine long before the end of the war in Afghanistan."

Blackburn interrupted, "I think we all know that. So [Putin] saw his opening, right?"

The general responded by suggesting that Russia's plans were likely created prior to the U.S. withdrawal from Afghanistan.

"Well, the forces were building up — they began to build up their force in September, October," Milley said. "So I think in order to do that, they would’ve had to have the plans and approval long before September, October."

Amid the evacuation in August, the Taliban took over Afghanistan. And a suicide bombing at the Kabul airport reportedly carried out by ISIS-K killed 13 U.S. service members and more than 170 Afghan civilians.

The Russian military used two major force buildups on the Ukrainian border last year, one in the spring of 2021 and another in the fall following the Taliban's Afghanistan takeover, with the second buildup ultimately leading to Putin's invasion.

In February, Milley told Congress behind closed doors that Ukraine's capital city of Kyiv could be conquered by Russia within 72 hours of a full-scale invasion.

Gen. Tod Wolters, the head of U.S. European Command, testified last month in front of the House Armed Services Committee that the Afghanistan withdrawal may have influenced Russia's invasion after Indiana GOP Rep. Jim Banks asked why Putin decided to stage an attack in February instead of any other time.

"I think he felt like he had the popular support of the citizens of Russia," Wolters said. "I also felt like he was attempting to take advantage of fissures that could have appeared in NATO as a result of the post-Afghanistan environment. And I also think that it has to do with his age and his efficacy."

Wolters added, "All those combined together put him in a position to where he elected to go at this time, but the overriding variable in my view is the fact that he believes that he has popular support with his citizens."