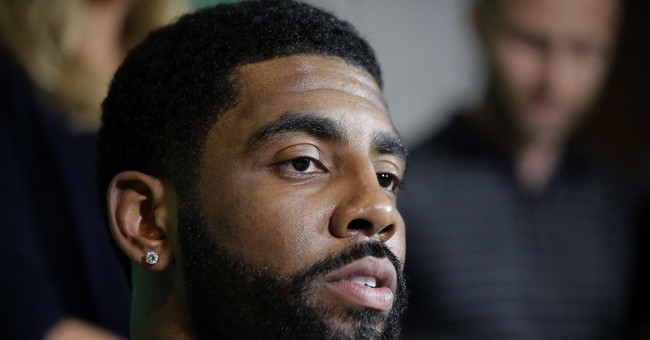 Under the relaxed rule, unvaccinated individuals may now go inside bars, gyms and large venues such as sporting arenas. The plan to ease the vaccine requirement was announced in late February and took effect on March 7.

Irving's appearance at the Barclays Center on Sunday was not as a member of the Brooklyn Nets, but rather, as a fan sitting in a courtside seat.

This, just hours after New York City mayor Eric Adams said that Irving still must receive his COVID vaccine if he wishes to play in Nets home games.

"Kyrie can play tomorrow. Get vaccinated," he said at a news conference.

Irving also was in attendance at the Barclays Center on Saturday as his college team, Duke University, fell to Virginia Tech in the ACC Tournament title game.

When Brooklyn Nets coach Steve Nash was asked if he had received an explanation for why Irving cannot play, he replied, "No."

Adams said in an interview last month after he announced that the city's public sector vaccine mandate would be lifted that allowing Irving to play would "send the wrong message."

"It would send the wrong message just to have an exception for one player when we're telling a countless number of New York City employees, 'If you don't follow the rules, you won't be able to be employed,'" Adams said in a Feb. 28 appearance on CNBC's "Squawk on the Street."

As has been the case all season, unvaccinated athletes playing for visiting teams are allowed to play in New York City.

Adams acknowledged during the CNBC interview that this policy on unvaccinated home players vs. away players "makes no sense" but explained that he must "follow the rules" in order to avoid "sending the wrong message to everyday employees." The policy was put in place during former mayor Bill de Blasio's administration.