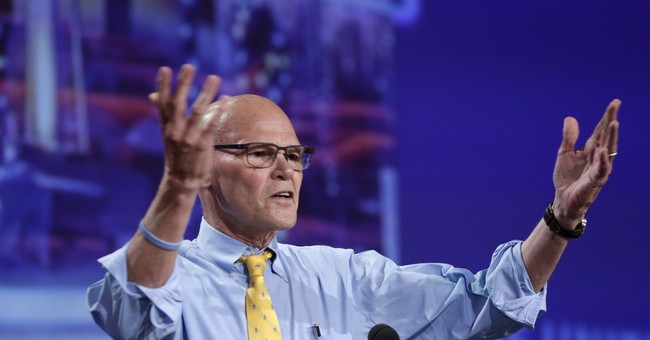 Democratic strategist James Carville explained during a recent episode of his podcast that people who are unvaccinated are a "piece of s--t" and that he would like to punch them in the face without being held liable for doing so.

Carville and journalist Al Hunt were asked by a listener why they believed President Joe Biden would not pass a bill blocking unvaccinated Americans from interstate travel during Thursday's episode of "Politics War Room with James Carville & Al Hunt."

Hunt responded by saying that he would support such a bill but that it likely would not stand once taken to the high court.

"I wouldn’t be against that at all. I’d be for it actually, as long as you put 'or testing.' Before you get on a plane or bus or interstate train, you want to be vaccinated or tested," Hunt said. "I don't think the Supreme Court would allow him to do that."

Carville replied, "I don’t either."

Hunt then explained that he does not think Biden "should expend much capital trying to get something done that's going to get knocked down."

Carville then suggested that a law be passed to give people immunity from punching someone who has not been vaccinated against COVID and does not have a medical reason not to be.

"I wish what they'd do is pass a law to make you immune from liability if you punch some unvaccinated person right in the face, which I'd really like to do," Carville said. "If you ask me what's my first reaction to you if you're not vaccinated, you don't have any medical reason not to be, you're a piece of s--t, OK? I just want to punch you in the god----ed face. That's the way I look at these people."