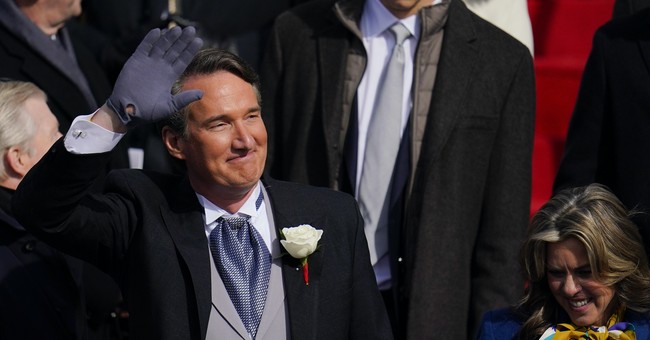 Newly-sworn in Virginia Gov. Glenn Youngkin (R) said Sunday that residents of the commonwealth are "ready for a new direction" and reiterated his campaign promise to give parents more control over their children's education after the governor signed a number of executive orders the day before in response to controversial moves by Virginia schools.

During an appearance on "Fox News Sunday," Youngkin told guest host John Roberts that Virginians from all walks of life are "ready for a new way forward."

"What we heard from voters on November 2, from all voters, not Republicans versus Democrats, but from Virginians, was that they are ready for a new way forward," he said. "We won the independent vote, we had droves of Democrats come across the aisle. We won the Hispanic vote and the Asian vote. We had a greater percentage of the Black vote than any Republicans got in recent memory. What this demonstrates to me is that Virginians are ready for a new direction."

Youngkin emphasized that he vowed to empower parents on the campaign trail and said that his administration would give parents more control over their children's education after "bureaucrats and politicians have absolutely stopped listening to parents" over the last few years.

"In Virginia, it is clear under law that parents have a fundamental right to make decisions for their children's upbringing, their education and their care, and so we are providing parents an opt-out," Youngkin said. "We're providing them the ability to make the right decision for their child with regards to their child's well-being. We are going to use all the authority that I have to consider all options to protect that right, and I think this is exactly what Virginians voted for in November and we delivered yesterday."

The new governor of the commonwealth also slammed the suggestion coming from critics that critical race theory is not being taught in Virginia schools. Youngkin signed an executive order Saturday banning the teaching of the controversial doctrine.

He pledged to "increase transparency" for parents and pointed out that he has ordered the Virginia Board of Education to review and eliminate "racially divisive and other divisive concepts" from the school system.

And when asked about the executive order to look into the Loudoun County school district regarding allegations that it covered up multiple rapes, Youngkin said it is crucial that Virginia school systems protect their students and expressed that "people should have already resigned" over the scandal because there was a "dereliction of duty."

The governor added that, following an investigation, he expects resignations of those complicit in the cover-up.

A teenage male high school student, who has been described as a skirt-wearing boy, was found guilty of raping a female student in a school bathroom at one Loudoun County school last year before transferring to another school in the district, where he raped another female student. The father of the first girl accused the school district of attempting to cover up his daughter's assault.

Leaked emails from the time of his daughter's rape revealed that school administrators were aware that the assault had been reported. However, superintendent Scott Ziegler said at a June 22 board meeting that "the predator transgender student or person simply does not exist," and, to his knowledge, "we don’t have any record of assaults occurring in our restrooms."