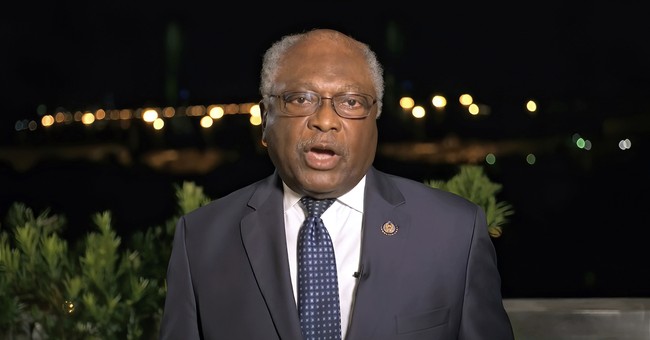 House Majority Whip Jim Clyburn (D-S.C.) explained Sunday that he backs the message President Joe Biden gave during a speech on voting legislation in Georgia last week despite pushback from lawmakers about the comparisons used in his remarks.

During an appearance on NBC's "Meet the Press," host Chuck Todd asked Clyburn about his thoughts about the president's speech, pointing out that Sens. Dick Durbin (D-Ill) and Mitt Romney (R-UT) took issue with Biden likening opponents of Democrats' voting legislation to segregationists.

"I endorse them wholeheartedly," Clyburn said. "Look, when we came out of Reconstruction in 1876, we started losing the right to vote. We started losing other freedoms. And we called it Jim Crow."

"We had a very successful election in 2020," he continued. "People voted at higher levels than they ever had before. And in reaction to that, Georgia, Texas, and 17 other states started passing draconian voting rights laws. That, to me, is Jim Crow 2.0. And so I like the way the president said it because that's exactly what it is."

Biden gave a speech in Atlanta last Tuesday pushing voting legislation, at which point he accused Republicans refusing to back the bills of "attacking voting rights" and suggested that they are on the side of segregationists.

Following Biden's remarks, lawmakers in both parties expressed that the president's message went "too far" and was divisive.

Durbin said during an interview on CNN that "Perhaps the president went a little too far in his rhetoric. Some of us do, but the fundamental principles and values at stake are very, very similar."

And during a speech on the Senate floor last week, Romney slammed the president for comparing Republicans to segregationists over their opposition to Democrats' voting legislation.

"He charged that voting against his bill allies us with Bull Connor, George Wallace, and Jefferson Davis. So much for unifying the country and working across the aisle," Romney said.

White House press secretary Jen Psaki later said during a press briefing that the president "was not comparing them as humans."

"I think everybody listening to that speech who's speaking on the level, as my mother would say, would note that he was not comparing them as humans," Psaki said. "He was comparing the choice to those figures in history and where they're going to position themselves as they determine whether they're going to support the fundamental right to vote or not."