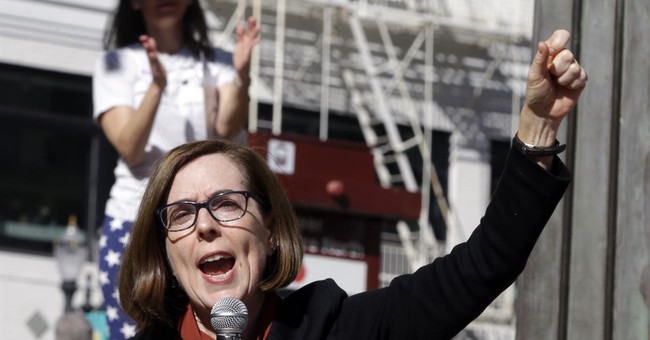 Oregon Gov. Kate Brown (D) was seen maskless at a Washington, D.C. gala over the weekend despite pushing for a "permanent" mask mandate in her own state.

Brown was a "featured guest" at the LGBTQ Victory Fund’s 30th anniversary gala in D.C. Saturday and was spotted without a mask, as seen in a photo posted to Twitter by an attendee.

What does it mean when you match with the amazing utterly fabulous and indefatigable champions for equality and progress who are @KateBrownForOR and @davidmgins? Thank you both for evening you do for advancing our communities! pic.twitter.com/LTweoiLrzI

And while the indoor mask mandate in D.C. was lifted last month by Mayor Muriel Bowser and virtually no other attendees were wearing a mask, Brown's appearance at the gala came just days after news broke that Oregon was considering a "permanent" face-covering requirement.

The Oregon Health Authority, which is part of Brown's administration, hosted the Rules Advisory Committee last week to discuss the possibility of implementing a "permanent indoor mask mandate.

Paul Cieslak, OHA's medical director for communicable diseases and immunizations, told local news outlet KATU that the potential "permanent" indoor mask mandate could be repealed in the future and thus, is not actually permanent.

"Permanent means indefinite. It doesn’t necessarily mean permanent," Cieslak said. "We can repeal it as well, but we are only allowed to have a temporary rule for 180 days, and anything that goes beyond 180 days, we cannot extend it."

This comes after OHA reinstated a mask mandate for large outdoor gatherings in August due to a spike in COVID-19 cases caused by the highly infectious delta variant.