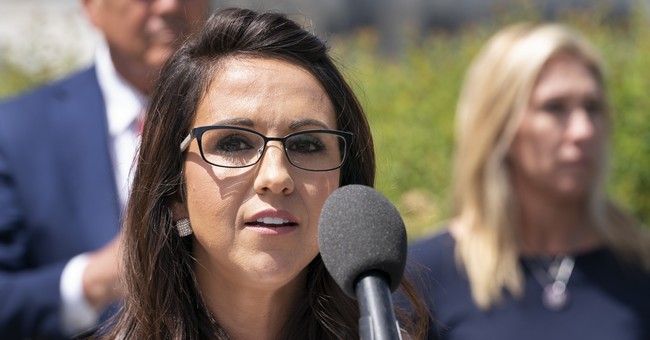 Rep. Lauren Boebert (R-CO) issued an apology to the Muslim Community for comments she made about Rep. Ilhan Omar (D-MN).

A video reportedly taken during a campaign event over Thanksgiving break showed Boebert telling her supporters in Colorado about an alleged recent elevator ride with Omar, in which the Republican said she witnessed a Capitol police officer run toward them "with fret all over his face" to try and prevent the elevator door from closing while the two congresswomen were inside.

"I look to my left and there she is: Ilhan Omar. And I said, 'Well, she doesn’t have a backpack. We should be fine,'" Boebert said in the video. "So we only had one floor to go and I was like eh, 'do I say it, do I not.' I looked over and I said, 'Oh look, the jihad squad decided to show up for work today.'"

"Don’t worry, it’s just her staffers on Twitter that talk for her. She’s not tough in person," Boebert continued.

Omar responded to the video by saying the elevator incident never happened and that Boebert's remarks were an instance of "Anti-Muslim bigotry."

"Fact, this buffoon looks down when she sees me at the Capitol, this whole story is made up,” Omar tweeted Thursday night. "Sad she thinks bigotry gets her clout. Anti-Muslim bigotry isn’t funny & shouldn’t be normalized. Congress can’t be a place where hateful and dangerous Muslims tropes get no condemnation."

Boebert later apologized for the comments made in the video and said that she had reached out to Omar's office to speak with her directly.

"I apologize to anyone in the Muslim community I offended with my comment about Rep. Omar," Boebert said in a statement Friday. "I have reached out to her office to speak with her directly. There are plenty of policy differences to focus on without this unnecessary distraction."

In another tweet, Omar called on House Speaker Nancy Pelosi (D-CA) and House Minority Leader Kevin McCarthy (R) to address Boebert's comments, saying that "normalizing bigotry not only endangers my life but the lives of all Muslims."