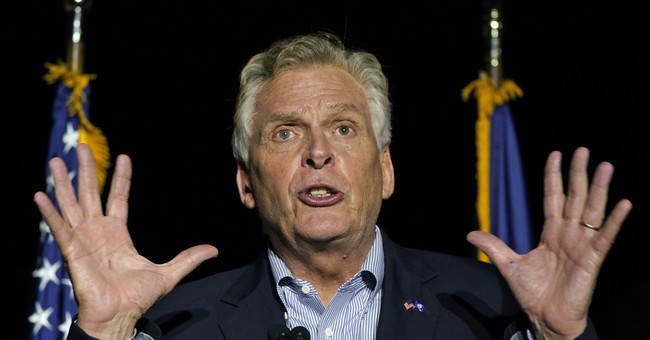 Democratic Virginia gubernatorial candidate Terry McAuliffe's multiple false statements about the number of COVID-19 cases and hospitalizations in the commonwealth earned him four Pinocchios from The Washington Post, its worst possible rating.

"The pandemic will continue to be a serious policy challenge for the next Virginia governor but there’s no reason for McAuliffe to hype the numbers. He earns Four Pinocchios," the paper's fact-checker, Glenn Kessler wrote after outlining each case in which McAuliffe gave a massive exaggeration of the true numbers. "He offers wildly inflated figures for child hospitalizations, suggesting again that these were daily figures and claiming twice that these many children were in ICUs. Instead, he appears to be citing a figure for all of the children hospitalized with covid-19 in Virginia over the past 19 months — which is still inflated."

"In speaking about the threat of the coronavirus to the state, McAuliffe frequently touts numbers — often wrong numbers about the impact on children," Kessler continued. "When we first queried the McAuliffe campaign about his figures, we were told it was a slip of the tongue. Okay, we understand that, and so we passed on a fact check. But then his tongue kept slipping."

Kessler noted that The Post did not become interested in McAuliffe's inflated figures until a Sept. 28 debate against GOP candidate Glenn Youngkin. During this debate, the one-time Democratic governor falsely claimed that there were 8,000 coronavirus cases "yesterday in Virginia." He then repeated the number on Sept. 29 and Oct. 7.

"When we checked the records, you had to go back to January to find a single day when a combination of confirmed and probable cases in Virginia got close to 8,000. On Sept. 27, there were fewer than 2,000 confirmed cases," Kessler wrote.

McAuliffe's campaign attempted to defend him by saying that he was talking about combined weekend numbers between that Friday morning and Monday morning and further claimed that he misspoke when he said that 1,142 children were in intensive care unit beds at the time.

But, as The Post pointed out, McAuliffe's numbers were far from hitting the accurate total as the true number of children in hospitals for the week ending on Oct. 2 was only 35. This included the children in intensive care.

The Democrat then repeated the false numbers over the course of the next few weeks. The numbers he cited pertaining to children hospitalized from COVID suggest he was using figures for the entirety of the pandemic. While this number, 952, is still wrong, it is much closer to the accurate statistic.

"We can understand the occasional misspeak, especially in the heat of a campaign. Moreover, as readers know, we generally do not award Pinocchios when a politician admits error," Kessler wrote.

"But this has happened too many times for McAuliffe’s language to be an accident," he continued. "He repeatedly mentions a weekend number for cases, but suggests it’s a one-day figure. He offers wildly inflated figures for child hospitalizations, suggesting again that these were daily figures and claiming twice that these many children were in ICUs. Instead, he appears to be citing a figure for all of the children hospitalized with covid-19 in Virginia over the past 19 months — which is still inflated."

This comes with only a week until Virginia's Nov. 2 election, which numerous polls show to be highly contested. An Emerson College/Nexstar Media poll released Tuesday shows McAuliffe and Youngkin tied at 48 percent each among likely voters with another three percent of voters still undecided and just one percent saying they plan on voting for third party candidate Princess Blanding.