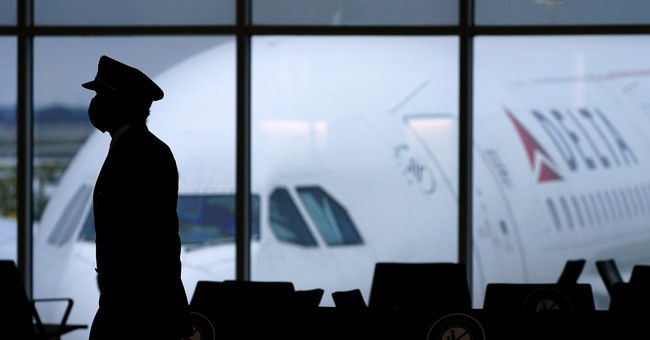 U.S. airlines are pushing for their employees to get vaccinated against COVID-19 as they prepare for inoculation requirements from the federal government.

President Joe Biden announced Thursday that employers with at least 100 employees will be required to mandate that workers get vaccinated or undergo weekly coronavirus testing. Vaccinations will also be required for employees of companies that contract with the federal government.

This move prompted American Airlines and Southwest Airlines, who had previously been hesitant to impose vaccine requirements and instead offered incentives, to make preparations for the administration's new virus mitigation efforts.

American Airlines CEO Doug Parker and President Robert Isom, in a Friday memo provided to Townhall, urged employees to get vaccinated, noting that the company will be subject to vaccination requirements.

"We are reviewing the Executive Order and are awaiting additional details, but based on what we see so far, it appears we will be impacted by these federally mandated efforts to increase vaccination rates," the memo read.

"While we will review the details of the plan and determine the path forward for American, what we know is that the president’s actions underscore the importance of team members getting vaccinated against COVID-19 — and sooner rather than later," the memo continued.

Southwest Airlines also said that employees are encouraged to get their COVID vaccine ahead of Biden's vaccine mandate going into effect.

"With more than 54,000 Employees, Southwest Airlines is prepared to move toward compliance with the forthcoming U.S. Labor Department rule," Southwest Airlines said in a statement to Townhall. "As we do our due diligence to understand the federal mandates and take the next steps toward full compliance, we continue to strongly encourage our Employees to seek and obtain vaccination, and to share their vaccination status with us."

United Airlines and Delta Airlines, however, had implemented vaccine mandates prior to Biden's announcement of a federal requirement. United announced mandates before a vaccine even had approval from the Food and Drug Administration.

In an Aug. 6 memo to employees, which was provided to Townhall, United Airlines said that workers must be fully vaccinated "five weeks after the FDA has announced it has fully approved a COVID-19 vaccine or five weeks after September 20th, whichever comes first."

The FDA approved the Pfizer vaccine back on Aug. 23.

Delta Airlines followed by announcing in late August that employees must be vaccinated by Sept. 12 or they will have to undergo weekly coronavirus testing. Unvaccinated employees covered by the airline's healthcare plan will also be subject to a $200 surcharge starting Nov. 1. These new requirements resulted in a five percent increase in employee vaccinations, according to a memo dated Friday.

The airline expressed its gratitude with being ahead of the administration on vaccine requirements.

"While we await the details of the administration’s plan, Delta is proud to have developed a vaccination program that has already seen 78% of employees get vaccinated," a Delta spokesperson said in a statement to Townhall. "Our employee vaccination numbers continue to grow following the announcement of our healthcare premium surcharge starting in November, and weekly testing starting next week, for those employees who choose to remain unvaccinated."