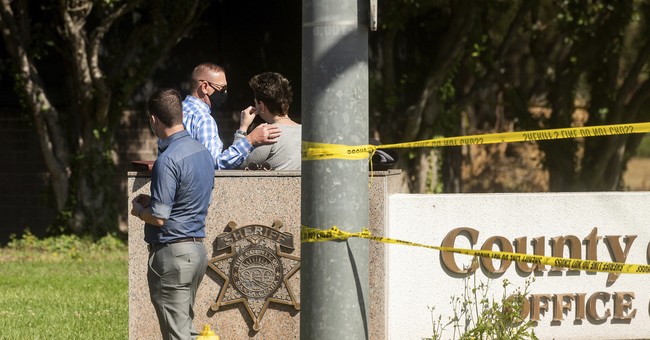 A Georgia man suspected of killing three people last week, including a golfer at an Atlanta-area country club, has been arrested and charged.

Bryan Anthony Rhoden has been charged with three counts of murder, three counts of aggravated assault and two counts of kidnapping for the homicides at the Pinetree Country Club in Kennesaw, Cobb County Police Chief Tim Cox said in a press conference.

Golfer Gene Siller was shot only after approaching the truck Rhoden drove onto a golf course at the club and was not considered to be a target.

Siller was shot because he “witnessed an active crime taking place,” Cobb County Police Department said, according to WBS-TV.

“Detectives have learned that Mr. Siller happened upon a crime in progress involving the unknown suspect and the two deceased males who were found in the pickup truck,” police said.

Cox said that the police “definitely feel confident there was no relationship between the shooter and Mr. Siller.”

Police later discovered two more bodies in the truck, including the vehicle's owner, who was identified as Paul Pierson.

Rhoden reportedly kidnapped Pierson and the other victim, Henry Valdez, by tying their hands, legs and mouths and holding them hostage before shooting and killing them.

Recommended
Report: White House Press Corp Is Not Pleased with Karine Jean-Pierre
Rebecca Downs
A GoFundMe for Siller's family has raised more than $685,000 as of Friday night.

All of us at the GSGA are deeply saddened by the tragic events that occurred earlier today at Pinetree CC. Our thoughts and prayers are with Gene Siller’s family and friends. ??