McAfee Had a Failed Suicide Attempt Months Before His Death 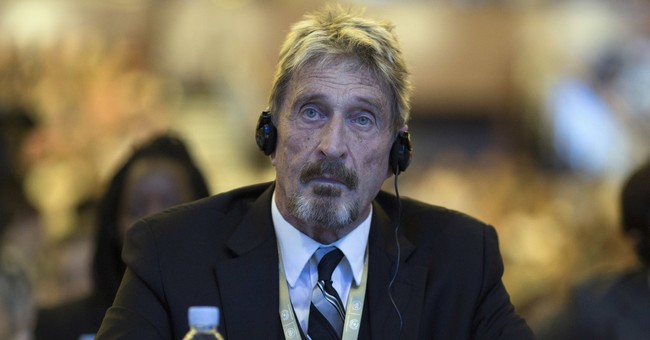 John McAfee initially attempted to kill himself back in February, several months before his death that officials also reported as a suicide.

His alleged failed suicide attempt resulted in him being supervised closely, a source within the penitentiary system told Reuters Friday.

The failed suicide attempt, which occurred Feb. 28 at the Brians prison complex outside Barcelona, prompted the prison to place McAfee on suicide watch, where he would be monitored more closely.

McAfee, who developed the world's first commercial anti-virus software, was awaiting his extradition to the United States on charges of tax evasion when he was found dead in his cell on June 23, as Townhall previously reported. Authorities said he died by way of suicide but there has been speculation surrounding his cause of death.

El Pais newspaper reported that the official autopsy indicated he died from suicide. However, officials would not confirm or deny the accuracy of this claim.

McAfee's lawyer Javier Villalba said no signs of suicide were shown by the software mogul prior to being found dead.

His widow, Janice McAfee, said that he was not suicidal and attributed his death to U.S. authorities.

"His last words to me were 'I love you and I will call you in the evening', those words are not words of someone who is suicidal," she told Reuters.

“I blame the U.S. authorities for this tragedy. Because of these politically motivated charges against him, my husband is now dead,” she continued.

McAfee said multiple times on social media that, should he die in the Spanish prison, it would not be because of suicide and that authorities would be responsible.

Getting subtle messages from U.S. officials saying, in effect: "We're coming for you McAfee! We're going to kill yourself". I got a tattoo today just in case. If I suicide myself, I didn't. I was whackd. Check my right arm.$WHACKD available only on https://t.co/HdSEYi9krq:) pic.twitter.com/rJ0Vi2Hpjj