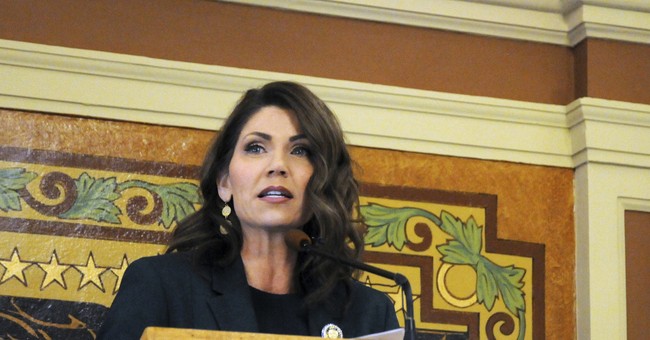 After state and local officials were informed Tuesday that the White House plans to host a Fourth of July celebration, South Dakota Gov. Kristi Noem criticized President Joe Biden for his "hypocrisy" as the administration previously denied her permit request for a Mount Rushmore fireworks display.

First responders, essential workers and military service members are invited to the White House festivities that will feature a cookout and fireworks, according to Fox News, which Noem argues goes against the rules placed on South Dakota.

Rules for thee but not for me...a long time favorite from the Democrat playbook. @joebiden, why are you being so hypocritical? You’re having your own personal fireworks show in DC, but South Dakotans are told no? https://t.co/4PPZkJ37hr

Noem's request to hold fireworks at the national memorial was initially rejected by the Biden administration in March and was upheld by a judge earlier this month following a lawsuit from the governor.

However, the Biden administration did say in their email to officials that they welcome "a summer of reunions and celebrations" across the nation.

"We welcome you to join us by hosting your own events to honor our freedom, salute those who have been serving on the frontlines, and celebrate our progress in fighting this pandemic," the president said.

The announcement signals a change in tone from Biden as his remarks on March 11 indicated that large Independence Day gatherings would not be permitted.

However, restrictions surrounding celebrations at Mount Rushmore remain in place.

In 2020, during the early months of the pandemic, fireworks were permitted by the Trump administration to be displayed at Mount Rushmore on the Fourth of July.

Updated guidance from the Center for Disease Control and Prevention that said that vaccinated individuals do not need to wear face coverings in most settings and relaxed COVID-19 restrictions in several states allowed fireworks and festivities to occur during Memorial Day weekend.

Biden's goal of 70 percent of Americans being vaccinated by Independence Day is not expected to be met, according to CDC data.