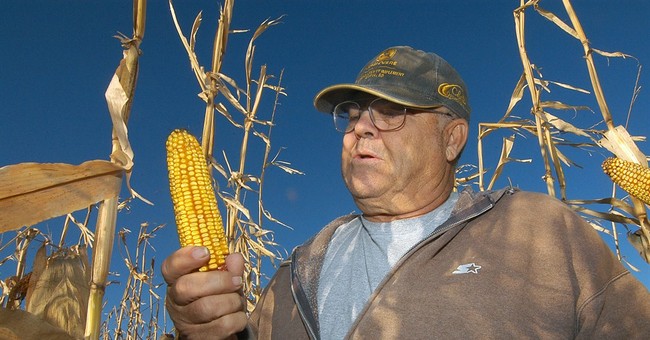 Congressional leaders announced a conference farm bill totaling nearly 1000 pages that will authorize most of our nation's agricultural programs - and food stamps (the Supplemental Nutrition Assistance Program, SNAP) - for the next five years.

I'd call it a disaster, but that would just mean that I was unrealistically optimistic that real reform could be achieved this time around.

The new conference bill reunites both parts of the farm bill and contains meager reforms, but still manages to spend over $100 billion every year. There legislation contains the elimination of the "direct payments" farm subsidy program but redirects that spending toward insurance programs for farmers. The Associated Press reports on "goodies scattered throughout the bill":

There are goodies scattered through the bill for members from all regions of the country: a boost in money for crop insurance popular in the Midwest; higher cotton and rice subsidies for Southern farmers; renewal of federal land payments for Western states...

Christine Harbin Hanson writes for Americans For Prosperity on the disappointment in this bill:

This deal authorizes a trillion dollars in spending over the next decade, representing an increase over the 2008 farm law. (This is on the heels of the $1 trillion pork-filled omnibus appropriations bill that Congress agreed to earlier this month.) This deal shifts most of the spending cuts to the out-years in the budget window, when they will probably never be realized. As we’ve discussed before on the AFP blog, scoring a 5-year bill over 10 years hides the true cost of Farm Bill programs—these are phantom Farm Bill savings. Farm Bill proponents argue that this conference report will reduce the deficit, but this claim woefully relies on Washington budget gimmicks.

There are meager cuts to food stamps. The legislation ends what's called "categorical eligibility" to the food stamp program, which provided a shortcut where food stamp applicants wouldn't actually have to prove their income eligibility for the program, which will save $800 million per year on a $70 billion program - savings of about 1%.

What's more, this legislation is a mammoth. It clocks in at 959 pages and gives members of Congress 72 hours to read and digest it before voting - and that includes today, when much of legislators' attention will be taken up by President Obama's State of the Union Theater. The National Journal reports that lawmakers on both sides are upset by the games being played with this farm bill's schedule:

Rep. Alan Grayson, the progressive icon from Florida, called transparency "democracy," while Sen. Tim Scott, the conservative darling of South Carolina, argued: "This is about the people that we serve, not the lobbying groups."

The farm bill is also another example of how Congress has turned away from carefully considering legislation and toward omnibus legislating. This 900+ page legislation drops on the heels of the omnibus budget passed last month that totaled over 1500 pages. There are still people who argue that Congress is "unproductive," but if we look at the number of pages of legislative text, they're still passing legislation above the historical average:

This farm bill will likely pass, just like the rest of the farm bills have passed. It's business as usual in Washington today, and the federal government's waste continues unabated.