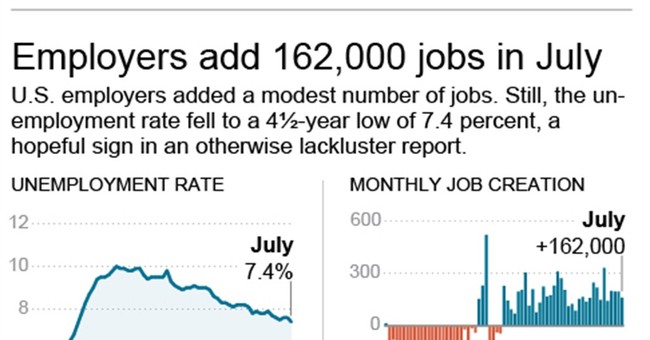 The unemployment rate has been going down over the last few months - slowly, yes, but surely - and the economy has appeared more resilient then predicted in the wake of sequestration going into effect. This may mask underlying problems in our economy that has made it appear better than it is.

As Emily Hulsey at the IJ Review writes:

The New York Times reported that the shift could, more specifically, be due to “the rise in the number of workers on disability.” Today, a record 8.7 million Americans receive disability benefits – that more than the population of New York City. However, the most disturbing aspect, as well as the most volatile variable, of this is the unprecedented number of young adults who are giving up on work and signing up for government assistance.

Surprisingly, this news is not due to the lack of jobs; rather, both Baby Boomers and Millennials are experiencing a skills gap. That is, the skills that employers demand do not match the skills that today’s unemployed possess. For example, in their job searches, many college graduates are encountering entry-level jobs that require only a high school diploma. A large number of Baby Boomers cannot find jobs in their respective fields, and employers consider them too close to retirement to invest in much training and education.

The drop in the labor force is being driven by more than demographic shifts. There are deeper problems at work in the economy. It's more than just a structural skills mismatch, though.

A record number of Americans have claimed federal disability payments. It's not necessarily because of fraud - a study found that fraudulence isn't particularly correlated with the business cycle - but that a struggling economy causes some people who might be otherwise employable to file for disability. There are two troubling aspects here: the federal disability program is expensive, and once a worker goes on disability, they're unlikely to re-enter the workforce. The Wall Street Journal explains:

Federal disability rules allow workers to get benefits only if they have an “impairment” that prevents them from working. But Mr. Rothstein notes that the ability to work isn’t necessarily independent of the labor market.

A construction worker who hurts his back, for example, might be able to get a desk job during good economic times; when unemployment is high, however, making such a career switch could be much harder. Moreover, companies are much more likely to make accommodations for existing workers who become disabled than to hire a disabled worker — so a person with a disability who loses a job might well struggle to find a new one.

Mr. Rothstein says his findings suggest that “really what’s going on is that there are people who are disabled who may in good markets be able to get jobs but in difficult market can’t.”

Just because people aren’t cheating the system doesn’t mean the rise in the disability rolls isn’t a concern. Economic research has found that the disability system is mostly a one-way street: Once people start receiving benefits, they rarely go back to work.

So while the economy has looked resilient this summer, it's not the case that there's nothing to worry about or that a skyrocketing recovery is right around the corner. There are long-term factors at play here - some of them structural - that mean we are a very long way away from full employment.