"Do Nothing" Congresses Add to Federal Register At Astronomical Rates 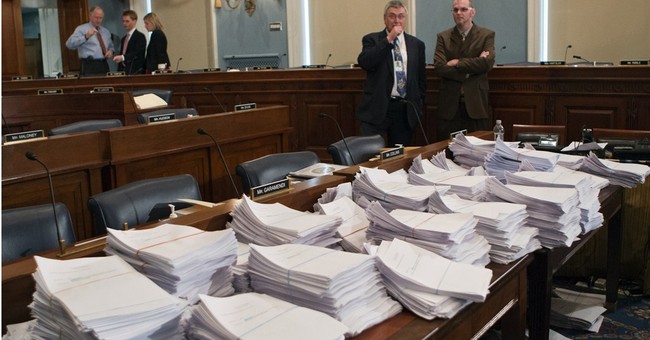 Recent Congresses have been denigrated for passing fewer pieces of legislation than at any other time in history. Notwithstanding the obvious - why would passing large amounts of legislation in and of itself be considered "successful"? - it also ignores that the size of each bill passed by Congress has grown larger and larger over time. A new report from the Brookings Institution confirms that, despite the low number of bills passed, Congress has been adding far more pages to the Federal Register than at any point in history.

Congress' heyday for passing legislation was the 84th Congress (1955-1956), in which over 1,000 bills were passed. Those bills, however, added on average fewer than two pages to the Federal Register. The most recent Congress for which Brookings compiled data, the 111th, passed only 383 bills but added nearly 20 pages for every bill, totaling over 7,600 pages added to the Federal Register in all.

The 112th Congress passed fewer bills by far from previous sessions, so once the data comes out, it might be the case that they actually didn't add all that much to the Federal Register. That would still be unlikely. Congress hasn't added fewer than 5,000 pages in the last twenty years. That's a far cry from the "productive" Congress of 1955, which added a scant 1,800 pages to the Federal Register.

This is what happens when we legislate by omnibus. Members of Congress would prefer to have only one politically difficult on a massive piece of legislation than a long series of difficult votes on smaller pieces of legislation. What it means, though, is that the larger bills get stuffed with pork and special interest carve-outs while they often have little to do with the actual issue at hand. Look at the Hurricane Sandy relief bill, for example: hundreds of millions of dollars went to parts of the country (like Alaska) completely unaffected by the devastating hurricane.

That's not to say that it's definitionally a bad thing that Congress adds laws and regulations at historically high rates. It could be that these massive bills are all good. But legislating by omnibus does insulate members of Congress from accountability for bad law, and it does mean that the laws that actually do get passed are massive complexities that, often, members of Congress only vaguely understand and that the executive branch will have difficulty carrying out.

It's part of the reason that House Republicans want to break up the comprehensive immigration reform bill into a smaller series. Many Republicans find an attractiveness in some of the provisions in the Senate-passed legislation, but don't want to have to sign on to a grocery list of policies they think would do harm to the country in order to get those good parts passed. It's part of the reason some members of Congress are talking about breaking up the Farm Bill - one of the most egregious examples of tacking on special interest handouts to an important policy.

Measuring Congress by number of bills passed is a really bad way to measure both productiveness and merit of a Congress. Adding pages to the Federal Register is a pretty bad way to measure as well. What this does say is that Congress has begun passing larger and larger pieces of legislation. That helps members of Congress evade responsibility for bad policy tacked on to enormous bills, and enables special interests to carve out their own favors.