Kevin Glass
|
@kevinwglass
|
Posted: Apr 19, 2010 8:13 AM
Share   Tweet
What's going on with the MSM? Whereas they once upon a time regarded the tea parties as the exclusive domain of fascist-racist-nazi-hypocrites, it seems as though some MSM outlets are starting to take the tea parties and the participants found within as - whaaa? - serious political forces that may even require the media to say something nice about them once in awhile!

Let's not get ahead of ourselves. We still have Frank Rich and his Krystallnacht comparisons. But left-leaning members of the media seem to be starting to come to the realization that tea parties are, largely, patriotic Americans with legitimate concerns about the direction of the country.

Here's Robert McCartney writing in the Washington Post over the weekend:

I went to the "tea party" rally at the Washington Monument on Thursday to check out just how reactionary and potentially violent the movement truly was.

Shocking! You mean that the media may have given you a mistaken impression about the tea parties, Mr. McCartney? Might you peek your head up and take a gander at your newsroom at the Washington Post to find the culprits? And then, perhaps, take a look in the mirror?

When it comes to the Tea Party movement, the stereotypes don't tell the whole story.

[H]ere's what you don't often see in the coverage of Tea Party rallies: Patriotic signs professing a love for country; mothers and fathers with their children; African-Americans proudly participating; and senior citizens bopping to a hip-hop rapper.

You don't see that much in Tea Party rally coverage? Why Mr. Travis, that's odd! Perhaps you should urge your colleagues at CNN to, like yourself, get out of the newsroom once in awhile to a rally before making a judgment about their character. 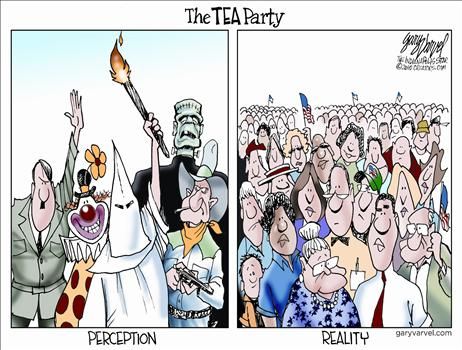