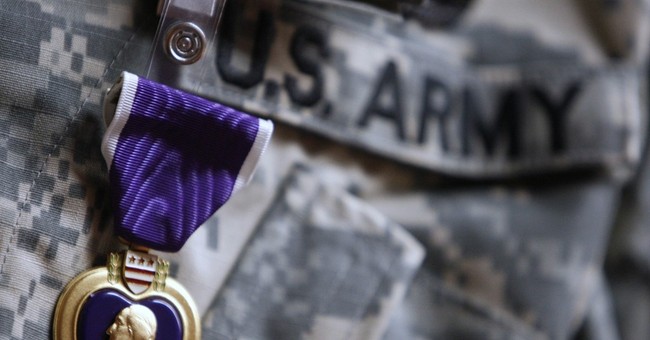 Iraq veteran Antoinette Scott was awarded the purple heart after her truck was hit by an IED (improvised explosive device) when she was transporting soldiers to Baghdad International Airport.

In honor of National Purple Heart day on Tuesday, Scott was interviewed on the Hill.TV’s ‘Rising’ this morning, by cohost Buck Sexton and Krystal Ball.

“There was so much going on, I didn’t have a chance to think about myself until I touched my face and I thought it was sweat and I saw blood — even at that moment, I’m like, ‘Someone is bleeding,’ it wasn’t happening to me in my mind,” Scott told cohosts Sexton and Ball Tuesday morning, reported The Hill.

Scott was awarded the Purple Heart back in March of  2016 with the Antionette Scott Recognition Resolution of 2016, 13 years after she received the injury.

Scott was able to keep her truck on the road, and deliver the entire unit to safety, but in doing so, she sustained life-threatening injuries. Shrapnel went through the side of her face breaking her jaw as well as the main blood vessel to her brain, for which she received 59 stiches.

Scott is the first female from the Washington D.C. area to receive the purple heart.

Scott is a mother of four and worked as a nurse for 12 years prior to serving eight years, in the D.C. Army National Guard. Scott was deployed to Iraq in 2003 as part of Operation Iraqi Freedom.  Approximately 50,000 have been awarded the purple heart as part on the operations in Iraq and Afghanistan.

The Purple Heart is one of the highest military honors to be awarded. It is awarded to those who were killed or wounded in while serving after April 5, 1917.

“One stigma is when you hear that we’re a disabled veteran, you expect to see the disability, and not all of us have visible disabilities,” Scott said this morning on ‘Rising” in response to the challenges that are faced by disabled veterans and how the civilians respond.