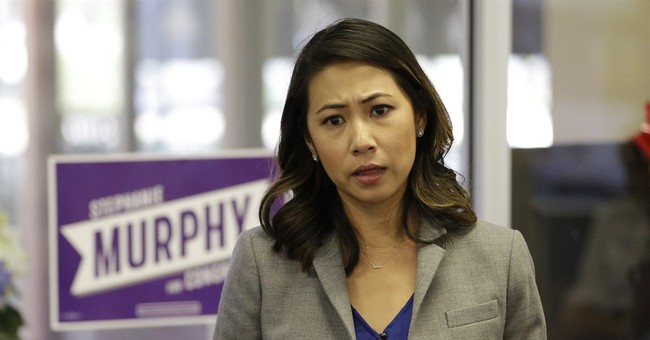 On May 31st, Scott Sturgill’s congressional campaign in the 7thdistrict of Florida put out a press release containing incriminating information concerning his opponent, incumbent Rep. Stephanie Murphy (D-FL). According to the press release, on the same night that Hurricane Irma left 3.8 million Floridians without power in September of 2017, Murphy shelled out more $3,200 for a fundraiser at The Charlie Palmer Steakhouse according to the FEC.

Nearly 300,000 of the 3.8 million Floridians who were left without power that night resided in Orange and Seminole Counties which Murphy represents.

“Seminole County accounts for about 70% of the purple district now listed as “EVEN’ by Cook Political Report's Partisan Voter Index, or PVI, which tracks how areas vote in presidential elections relative to the country as a whole,” according to the press release.

As reported in the press release:  “Scott Sturgill, a Central Florida businessman running for Congress as a Republican, is introducing a new phase of his campaign aimed at branding his incumbent opponent as ‘#SteakhouseStephanie.’” The Sturgill campaign has gone so far as to launch a website and release a web video named after the hashtag, the campaign said that their ad buy was “significant” but did not indicate a specific amount.

“The responsible thing would have been to postpone the fundraiser and head home as soon as possible…You shouldn’t need staffers to point out the poor optics and bad timing.  Steakhouse Stephanie owes the voters an explanation…While the folks back home were literally in the dark, their congresswoman wasn't in the aftermath of the storm lending a helping hand because she was busy at an insider steakhouse in DC empowering the extreme partisans and dark money special interests that want Nancy Pelosi back in charge. So much for putting people over politics"Sturgill has been endorsed both the current Lt. Governor of Florida Carlos-Lopez Canteras as well as the former Speaker of the House, John Boehner.

On June 1st, the story was reported by the Central Florida Post: “The one-term Democratic Congresswoman is under fire from the Scott Sturgill campaign for a $3200 fundraiser at the Charlie Palmer Steakhouse shortly after the events of Hurricane Irma.”

However, Sturgill is not the only one of Murphy’s opponents who is directly targeting her campaign. Chardo Richardson, Murphy’s progressive opponent, is attacking her campaigning because of her close relationship to President Trump.

“First she voted in favor of [President] Trump’s disastrous budget giving massive tax breaks to the rich…Now she’s voted with Republicans and [President] Trump to ease regulations on banks. The same regulators that were put in place to protect people,” said Richardson. “Richardson points out that, despite Murphy running an anti-Trump campaign back in 2016, she has voted with President Trump and Republicans 44.7% of the time, according to FiveThirtyEight.”