Schumer Forces Democrats to Walk the Plank on Abortion 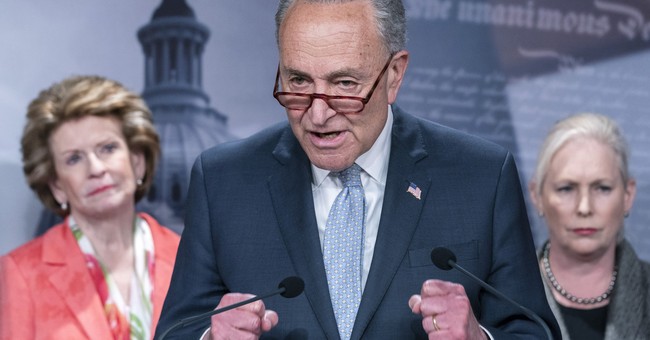 Senate Majority Leader Chuck Schumer will force Democrats to vote on an extreme abortion bill Wednesday knowing it will fail to reach the 60 vote threshold needed for passage.

"Democrats are once again headed for a show vote — this time on abortion — that risks dividing their party, depressing their base, and looks all but certain to be defeated," NBC News describes.

Today, this Senate will vote on the Women’s Health Protection Act to codify the right to an abortion into federal law.

The American people will see where every single U.S. Senator stands.

For days, Schumer and House Speaker Nancy Pelosi have argued the legislation codifies Roe v. Wade, but the bill goes far beyond a "woman's right to choose" by forcing religious health providers to perform the procedure up until birth.

2. It would strike down almost all state laws on abortion, including parental-consent laws supported by 70% of Americans: https://t.co/fav7X8zf06 pic.twitter.com/pw0uW6diJy

The bill also refers to women as birthing people.

Vulnerable Senate Democrats — enjoy defending replacing “women” with “birthing persons” for the next 6 months after you vote for this incredibly stupid bill today. https://t.co/HpArTuIZFO

The majority of Americans, including women, want restrictions on abortion after 15-weeks of pregnancy.

Meanwhile, despite polling showing the vast majority of Americans do not support protestors descending on the homes of Supreme Court Justices, the White House and Democrats continue to endorse the behavior.

"Are you comfortable with protests that we saw outside the homes of Supreme Court justices over the weekend?"