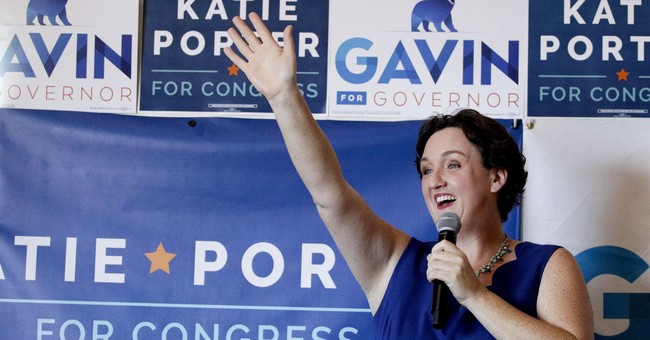 Facing a tough reelection battle in November, California Democrat Katie Porter claims to be sounding the alarm about inflation after a $9.99 per pound packet of bacon triggered her at the grocery store.

"Only after Rep. Katie Porter put bacon in her cart at her local grocery store recently did she notice that its price had spiked to $9.99 a pound. Reluctantly, she put the package back," POLITICO reports. "When Porter gave an emotional speech about how inflation has hit her family during a private House Democratic Caucus meeting last week, she said it seemed like the first time the personal toll of high consumer prices had sunk in for some lawmakers in the room."

"For Porter, the episode revealed how much work Democrats still need to do to assure voters they understand everyday anxieties, particularly inflation’s strain on family budgets. She’s not alone: Some Democrats have warned for months their party is falling short when it comes to communicating to an increasingly exasperated public," the story continues.

What the story failed to include is Porter's status as a millionaire. She also voted for Biden's massive government speeding agenda, which caused current inflation and high prices.

Crocodile tears from the same Democrats who voted for inflation.

And if these Democrats had the votes, they would have spent trillions more. https://t.co/JE8nsSkeaZ

Arsonist complains about the fire. pic.twitter.com/hwtgirFDwp

During remarks at the White House Tuesday, Biden attempted to blame inflation on Republicans. Data on his $1.9 trillion American Rescue Plan tells a different story.

It's not something to "agree" on. It's simply a fact.

They can try to hide behind the fact that the whole world experienced inflation - they can't hide from the fact that ours was markedly worse because of the "American Rescue Plan." https://t.co/47KvqRVAsL pic.twitter.com/Exmy4AF32I