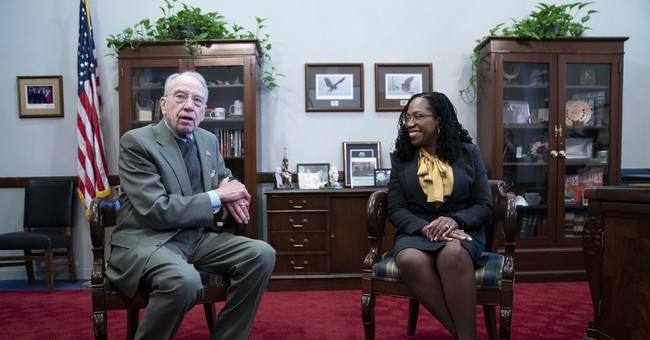 But according to Senate Judiciary Committee Ranking Member Chuck Grassley, Jackson's full record has not been submitted for review.

White House+Dems keep saying Judge Jacksons Sentencing Commission experience is central to resume for Supreme Court But we still havent seen any internal records from her work there We get these records for other SCOTUS nominees Why not Judge Jackson?

Meanwhile, Republican Senator Josh Hawley has been sounding the alarm over Jackson's record on sentencing for criminals convicted of producing or disseminating child pornography.

So far, the Sentencing Commission has refused to turn over all Judge Jackson’s records from her time there. In light of what we have learned, this stonewalling must end. We must get access to all relevant records

Over the weekend Republican Senator Marsha Blackburn expressed concern about Jackson's soft on crime record, in addition to her lack of clear judicial philosophy.

“She doesn't seem to have a judicial philosophy. She will not be clear about where she [supports] court packing. I have talked to a lot of women who were quite concerned about her record when it comes to how she's dealt with crime, how she's been soft on criminals, and soft on child pornographers and child abusers," Blackburn said during an interview with Fox News over the weekend. "I'm very troubled about her record, whether it was when she was in private practice, the sentencing commission, or on the bench. She would've let 1,500 prisoners go during COVID. Among the ones she let go were a murderer, a bank robber. These are hardened criminals back on the streets."