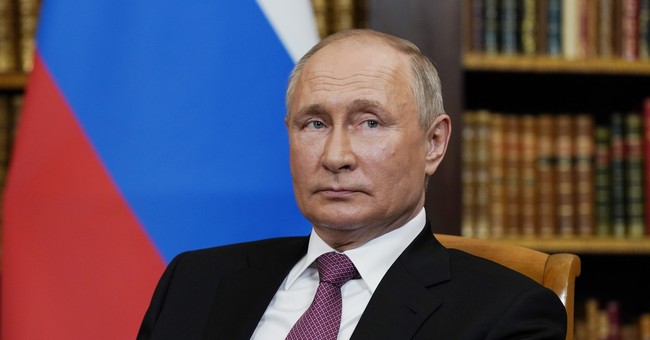 President Joe Biden participated in a video call with Russian President Vladimir Putin Tuesday morning as tensions with the Kremlin increase over a possible invasion of Ukraine. The call lasted for two hours.

While the White House press pool wasn't allowed into the meeting, reporters for Russian state media were and released footage of the call.

"I hope next time we can meet in person," President Biden can be heard telling Putin on their video call.

Russia allowed state media in for a short video spray of the first few moments of the call - the White House did not allow American press any access. https://t.co/KcBZwHdFQK

Putin has amassed 90,000 troops on Ukraine's border and is expected to invade the country in the early months of 2022.

On Capitol Hill, lawmakers are watching the Biden White House closely and warning that China is doing the same.

“Diplomacy without action is weak and Vladimir Putin only understands strength. Allowing him to execute a land grab in Ukraine would be a humanitarian disaster in Europe and embolden other malign entities such as the Chinese Communist Party. President Biden must send a strong signal to Putin, Xi, and other brutal strongmen around the world that the United States will not condone violent takeovers of nations," Republican Senator Marsha Blackburn released in a statement.

.@SenTedCruz: "As we speak, hundreds of thousands of Russian troops are massed on the border of Ukraine waiting to invade. This calamitous foreign policy disaster is Joe Biden's fault." https://t.co/m8lYttp50y pic.twitter.com/Pv9ACilqOI