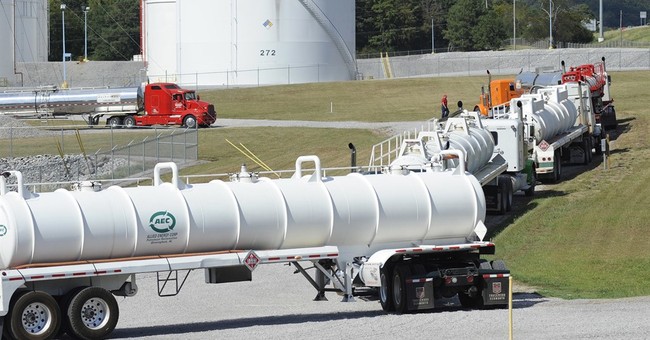 President Biden declared a state-of-emergency Sunday night after a foreign cyber attack forced a precautionary shutdown of the Colonial Pipeline system, which supplies 45 percent of the East Coast with fuel.

"The U.S. Department of Transportation (USDOT) announced today as part of the federal government’s efforts to actively assess the implications of the Colonial Pipeline incident and to avoid disruption to supply, that the USDOT’s Federal Motor Carrier Safety Administration is taking steps to create more flexibility for motor carriers and drivers. FMCSA is issuing a temporary hours of service exemption that applies to those transporting gasoline, diesel, jet fuel and other refined petroleum products to Alabama, Arkansas, District of Columbia, Delaware, Florida, Georgia, Kentucky, Louisiana, Maryland, Mississippi, New Jersey, New York, North Carolina, Pennsylvania, South Carolina, Tennessee, Texas and Virginia," USDOT released in a statement. "USDOT’s top priority is safety, and while current circumstances dictate providing industry flexibility, FMCSA will work closely with its state and industry partners to monitor driver work hours and conditions for the duration of the exemption."

As the Administration works to mitigate potential disruptions to supply as a result of the Colonial Pipeline incident, @USDOT is taking action today to allow flexibility for truckers in 17 states. https://t.co/mILRtlhjkP

On May 7, Colonial Pipeline Company learned it was the victim of a cybersecurity attack and has since determined that the incident involved ransomware. Quickly after learning of the attack, Colonial proactively took certain systems offline to contain the threat. These actions temporarily halted all pipeline operations and affected some of our IT systems, which we are actively in the process of restoring.

Leading, third-party cybersecurity experts were also immediately engaged after discovering the issue and launched an investigation into the nature and scope of this incident. We have remained in contact with law enforcement and other federal agencies, including the Department of Energy who is leading the Federal Government response.

Maintaining the operational security of our pipeline, in addition to safely bringing our systems back online, remain our highest priorities. Over the past 48 hours, Colonial Pipeline personnel have taken additional precautionary measures to help further monitor and protect the safety and security of its pipeline.

The Colonial Pipeline operations team is developing a system restart plan. While our mainlines (Lines 1, 2, 3 and 4) remain offline, some smaller lateral lines between terminals and delivery points are now operational. We are in the process of restoring service to other laterals and will bring our full system back online only when we believe it is safe to do so, and in full compliance with the approval of all federal regulations.

At this time, our primary focus continues to be the safe and efficient restoration of service to our pipeline system, while minimizing disruption to our customers and all those who rely on Colonial Pipeline. We appreciate the patience and outpouring of support we have received from others throughout the industry.

White House Press Secretary Jen Psaki is expected to give further details about the situation during the daily briefing, which is scheduled for 12 pm et.