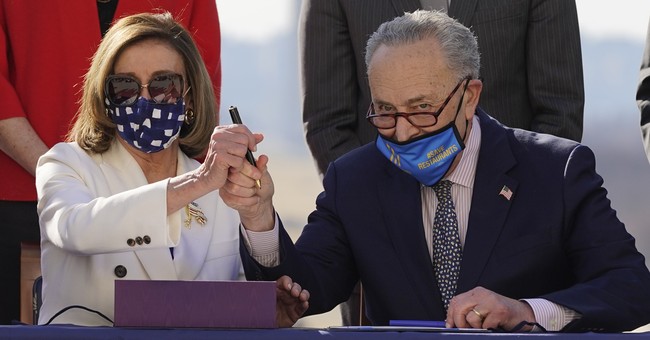 "The Parliamentarian has advised that a revised budget resolution may contain budget reconciliation instructions. This confirms the Leader's interpretation of the Budget Act and allows Democrats additional tools to improve the lives of Americans if Republican obstruction continues. While no decisions have been made on a legislative path forward using Section 304 and some parameters still need to be worked out, the Parliamentarian's opinion is an important step forward that this key pathway is available to Democrats if needed," a spokesman for Schumer released Monday.

Senate Finance Cmte chair Wyden: I’m pleased by the parliamentarian’s ruling that budget resolutions can be revised, allowing us to consider moving additional bills through the reconciliation process..Democrats now have more options to overcome GOP obstruction &!get things done

While Republicans have opposed Biden's "infrastructure" spending spree that reads like the Green New Deal, Democrats are also opposing the bill.

JUST IN: Sen. Manchin (D-WV) says he and other Senate Dems will vote against the Biden admin's infrastructure package because of the proposed corporate tax raises -CNN