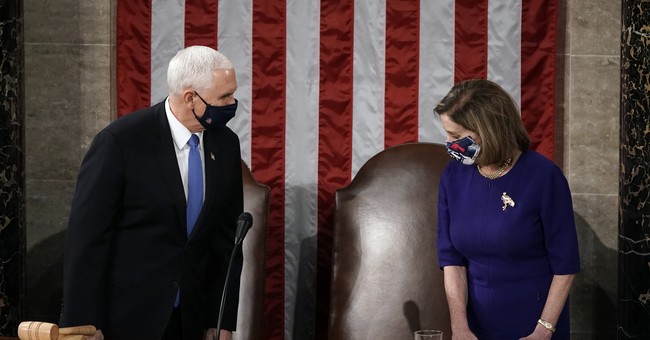 McConnell: The United States Senate will not be intimidated..We will not bow to thugs.” McConnell says they will finish “tonight”

House Speaker Nancy Pelosi announced Wednesday evening lawmakers will return to the floor and continue their work to certify the 2020 Electoral College vote.

"In consultation with Leader Hoyer and Whip Clyburn and after calls to the Pentagon, the Justice Department and the Vice President, we have decided we should proceed tonight at the Capitol once it is cleared for use. Leader Hoyer will be sending out more guidance later today," Pelosi released in a statement. "We always knew this responsibility would take us into the night. The night may still be long but we are hopeful for a shorter agenda, but our purpose will be accomplished."

"Members and staff should remain on the Capitol complex until they are notified by the United States Capitol Police," the statement continues. "I look forward to seeing you later this evening."

JUST IN: Speaker Pelosi says "we have decided we should proceed tonight" with electoral college certification pic.twitter.com/gpYn8ZLpYk

And now we will finish the People’s business.

Earlier in the evening, Congressman Steve Scalise and Liz Cheney also said they intend to return to the Capitol and finish the job.

Fox is told the “goal” is for House/Senate to come back around 8 pm et. But the chambers are trashed. Glass is everywhere. Slippery floors. And this is during a pandemic. Unclear if they can move that quickly.