McEnany Fights Back Against Democrats' 'Search and Destroy' SCOTUS Tactics 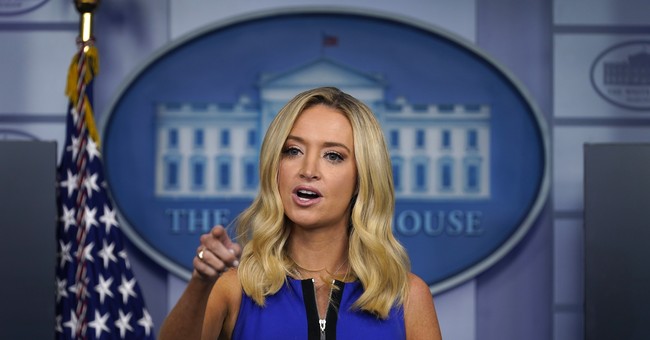 Speaking during a briefing at the White House Tuesday, Press Secretary Kayleigh McEnany slammed Democrats in the media and on Capitol Hill for threatening to "burn down the system," impeach President Trump and pack the Supreme Court.

"Contrast the President's solemn constitutional duty with Democrats search and destroy politics. Nancy Pelosi has vowed to attack the President with 'arrows.' Speaker Pelosi will not rule out impeaching this President for doing his job, for fulfilling his constitutional obligation. AOC said that impeachment is an option 'on the table' while Chuck Schumer nodded in approval," she continued. "Democrats cannot win their argument on the merits. They cannot win on precedent so they must search and destroy. Don Lemon said the quiet part out loud last night when he said this, 'We're going to have to blow up the entire system' if the President does his job as outlined in the constitution. That's the difference between Republicans and Democrats. We fight to protect the system. We fight to protect the constitution. When Democrats say outright we are going to blow up the entire system because we do not get our way. This President will proceed undaunted by Democrat threats. President Trump will fulfill his duty. President Trump will appoint the next Supreme Court Justice."

Share this on Facebook
Tweet
Jill Biden Campaigns for Terry McAuliffe: 'You Need Somebody That You Can Trust'
Landon Mion
Joe Manchin Has a Message for 'Self-Declared Independent Socialist' Bernie Sanders
Rebecca Downs
Bernie Sanders Says the Media is to Blame for Americans Not Knowing What is Included in Spending Plan
Landon Mion
There's Already Fallout from the Release of Drafted Materials from Biden's Commission on Supreme Court