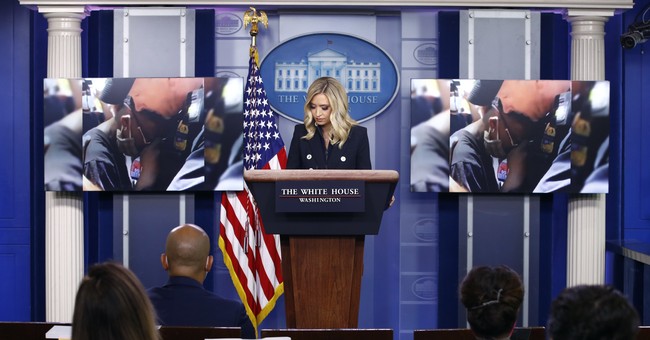 While violent rioters continue to hijack peaceful protests across the country, broken windows and burned out buildings are understandably front-page news. But there's another side to this story and one that should be highlighted.

During a briefing at the White House Monday afternoon, Press Secretary Kayleigh McEnany played a montage of protestors and police embracing, walking together and coming to peaceful agreements over the death of George Floyd.

"We cannot let violence, we cannot let looting and a few bad actors divide us an American people. The American spirit is defined by love and mutual acceptance and kindness and despite the horrific scenes we've seen play throughout the media, there are some things we haven't seen and I think it's important for the American people to see them," McEnany said. "Across the country we've seen examples of police protecting protestors and protestors embracing police and it's been beautiful to watch."

????#repostpositivity???? Repost @byron_rodgers let’s repost positivity and unity to help restore our country. Let’s use the free media to fight the medium mind control machine. Let’s fight fear and aggression with the reality that adversity can separate us but it can also bring us closer together???? RePosted @withregram • @ink_monsterr There’s a lot of rioting and violence right now, but there’s also people who still care and respect each other. There is power in unity ???????? If you’re out there protesting, do it peacefully! ??PROTECTOR by nature and by trade @byron_rodgers . . Check the link in my bio?? . . #ByronRodgers #security #bodyguard #closeprotection #bodyguards #Police #SelfDefense #executiveprotectionlifestyle #executiveprotection #vipprotection #vipsecurity #privatesecurity #armedprotection #personalprotection #Protection #SecurityConsulting #RiskManagement #ConcealedCarry #CorporateSecurity #AssetProtection #TrainLikeYouFight #1Responder #SelfDefense #executiveprotectionlife #ChurchSecurfity

While hate and violence has gripped the attention of America, unity and agreement will work to defeat the anarchists.