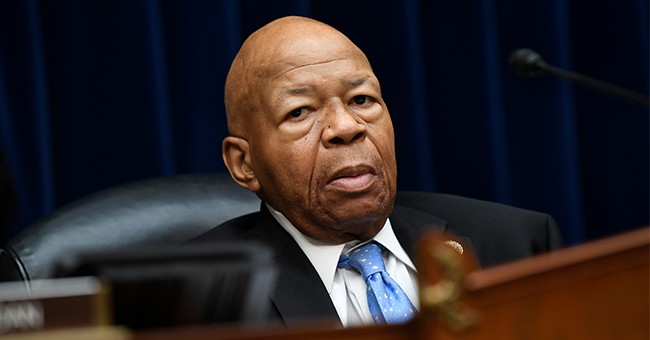 An interesting update to this story:

FYI.. Our Black Elitist Class Cummings was never at risk when burglarized..This was his "In The Hood" rental home to CON his constituents about how WOKE he is. Nope..sleeping safe and sound in his gated community surrounded by 24-7 police protection. https://t.co/IiPN0u2H5n

House Oversight and Government Reform Chairman Elijah Cummings' home was broken into last weekend in Baltimore, further proving the city has a crime problem that is out of control.

"Baltimore Police are investigating after the home of Rep. Elijah Cummings was broken into early Saturday morning," CBS Baltimore reports. "The burglary occurred around 3:40 a.m. at his Baltimore home in the 2000 block of Madison Avenue."

Last weekend President Trump criticized the horrific living conditions in parts of Cummings districts after the break in occurred. The burglary wasn't made public until yesterday.

Really bad news! The Baltimore house of Elijah Cummings was robbed. Too bad!

Cummngs is back in the district for August recess and will return to Washington D.C. in September.

I visited a packed house at Stadium Place today to provide the seniors there with a legislative update & to talk about my work in Congress. We talked about what matters to them, & they encouraged me to keep doing my job & continue fighting for them in Washington. pic.twitter.com/UPKxoHGSA3

In the meantime, Baltimore continues to be one of the most dangerous cities in the world and has a murder rate higher than most Central American countries.

HUD Secretary Ben Carson, a Baltimore native, was in the city earlier this week and invited Congressman Cummings to tour a facility and discuss how to solve problems plaguing local communities. Cummings refused.