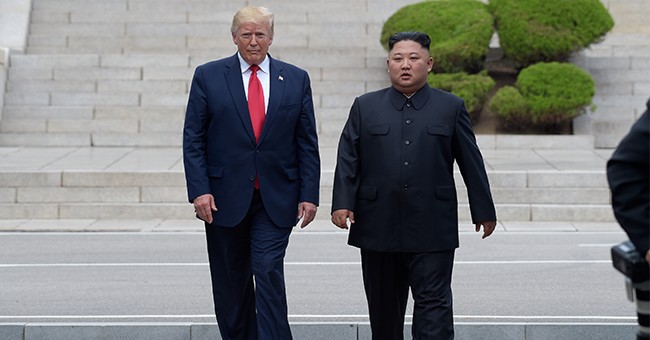 President Donald Trump met with North Korean dictator Kim Jong Un on Sunday morning after putting out the invitation to do so on social media yesterday.

After some very important meetings, including my meeting with President Xi of China, I will be leaving Japan for South Korea (with President Moon). While there, if Chairman Kim of North Korea sees this, I would meet him at the Border/DMZ just to shake his hand and say Hello(?)!

The two leaders met in the Demilitarized Zone between North and South Korea when Kim invited President Trump to walk into North Korea. He accepted the invitation and became the first sitting U.S. president to do so.

Before leaving the Korean Peninsula, President Trump said nuclear negotiations with Kim's regime with continue after being stalled for months.

Leaving South Korea after a wonderful meeting with Chairman Kim Jong Un. Stood on the soil of North Korea, an important statement for all, and a great honor!

Grisham was seen on camera pushing back North Koreans who were blocking US press. Shouting "Go! Go!" as she created a path for press to join the Trump-Kim meeting. https://t.co/smFer0JwGw

This is the moment White House Press Secretary Stephanie Grisham got into a scuffle with North Korean security guards who were blocking US journalists pic.twitter.com/WSBkdDw17g

President Trump is on his way back to the United States after a trip to the G20 in Japan.