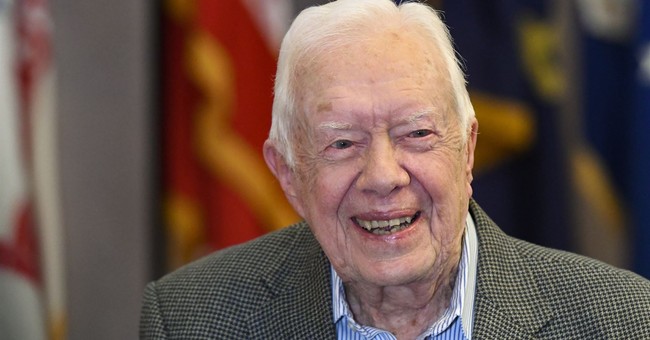 "If fully investigated, it would show that Trump didn't actually win the election in 2016. He lost the election and he was put in office because the Russians interfered on his behalf," Carter said.

NEW: Former Pres. Carter says a full investigation "would show that Trump didn’t actually win the election ... He was put into the office because the Russians interfered."

Asked if he thinks Trump is an illegitimate president: "Based on what I just said, which I can't retract." pic.twitter.com/9njBlQec0N

First of all, President Trump won the 2016 election fair and square. Second, did Carter completely miss two years of Robert Mueller's Special Counsel investigation? And hours of endless media coverage about the investigation?

In fact, the 400-page Mueller report states the following: "[T]he investigation did not establish that members of the Trump campaign conspired or coordinated with the Russian government in its election interference activities."

"The Special Counsel's investigation determined that there were two main Russian efforts to influence the 2016 election. The first involved attempts by a Russian organization, the Internet Research Agency (IRA), to conduct disinformation and social media operations in the United States designed to sow social discord, eventually with the aim of interfering with the election," the Department of Justice stated about Mueller's findings. "As noted above, the Special Counsel did not find that any U.S. person or Trump campaign official or associate conspired or knowingly coordinated with the IRA in its efforts, although the Special Counsel brought criminal charges against a number of Russian nationals and entities in connection with these activities."

With 19 attorneys, Mueller issued more than 2000 subpoenas and carried out 500 search warrants over a two year period. They interviewed hundreds of people. That's a full and thorough investigation.

Not a single vote was changed in the 2016 election by Russian operatives. Carter's claim is reckless and ironically fuels Russian propaganda efforts.