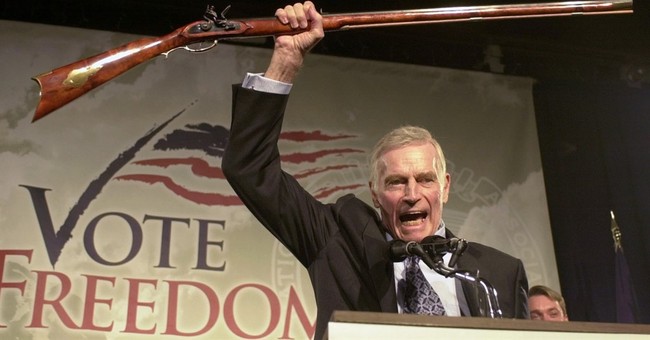 During his first presidential campaign, current Democrat 2020 presidential candidate and former Vice President Joe Biden repeatedly told a story about marching during the civil rights movement. The problem? He didn't. The story he told wasn't true.

"I marched with tens of thousands of others to change attitudes," Biden said of the civil rights movement in his '88 race.

He did not march. Aides kept reminding him of this. And the story kept slipping back into his stump speech anyway. https://t.co/7J0jP09zoU

As Democrats attempt to differentiate themselves in a crowded, far-left field of contenders, the National Rifle Association has become a favorite target for attacks. During a town hall with Fox News Sunday night Senator Kirsten Gillibrand said it was the worst organization in America, despite being a fan just a few years ago.

Gillibrand called us the worst org in the country, but when she represented NY20, she wrote us: “I appreciate the work that the NRA does to protect gun owners rights, and I look forward to working with you for many years.” Now that she’s looking to crack 1%, she’ll say anything. pic.twitter.com/uW5OgpUa5B

Senators Cory Booker, Kamala Harris, Elizabeth Warren, Bernie Sanders and others have essentially said the same and vow to "take on the NRA" from the Oval Office.

Leftist candidates need an enemy and they're using the NRA as a scapegoat.

But back to Joe Biden. While the former vice president lied about his role in the civil rights movement, former NRA President Charlton Heston actually did march -- right along side Martin Luther King Jr. He was there for the 1963 March on Washington, spoke at the historic event and stood at the Lincoln Memorial as King gave his famous "I Have a Dream" speech.

Long active in political and social causes, Heston publicly supported the civil rights movement and participated in the historic march on Washington with Martin Luther King Jr. in 1963. In 1966, Heston succeeded his friend and fellow actor Ronald Reagan as president of the Screen Actors Guild, a post he would hold until 1971. He also served as chairman of the American Film Institute from 1973 to 1983. After Reagan won the U.S. presidency in 1980, he appointed Heston as the co-chairman of a task force on arts and humanities. In this role, Heston defended National Endowment for the Arts and proved to be an effective speaker and public figure.

According to his obituary in The New York Times, Heston switched his political affiliation from Democrat to Republican in 1987, after the Democrats blocked the Supreme Court appointment of Robert Bork, a conservative whom Heston supported. Over the next decade, Heston began increasingly to speak out about what he saw as a decline of morality in American popular culture and entertainment. In 1996, he campaigned on behalf of various Republican candidates. He began focusing specifically on the opposition to gun control. After being elected vice president of the NRA in 1997, he became president the following year.

Heston parlayed his rugged onscreen persona into a forceful role at the head of the NRA’s campaign against what it saw as the federal government’s attempts to encroach on the constitutional right to bear arms. In 2000, he made a memorable speech at the NRA’s annual convention, bringing his audience to their feet with the rousing claim that gun-control advocates would have to pry his gun “from my cold, dead hands!”

In addition, Civil Rights icon Roy Innis served on the NRA board of directors for nearly three decades.

Mr. Innis served on the NRA’s Board of Directors for nearly 25 years and was a friend to many within the organization. For the nation at large, he was a champion of freedom who exemplified the courage of a man who follows his own convictions.

Roy Innis’s views on the best path to equality and achievement for African Americans often diverged from other civil rights figures of his day. After two of his sons were murdered with firearms in New York City – Roy Jr., 13, in 1968, and Alexander, 26, in 1982 – he became an advocate for self-defense and an opponent of gun control.

By disarming law abiding citizens the government aids and abets crime, he explained to the New York Times. He counseled other African Americans that gun control “was not meant to protect your safety; it was meant to deprive you of your freedom.”

These views led him to become a life member of the National Rifle Association, and he was eventually elected to its board of directors.

History matters and the real story is on the side of the NRA.

Reagan McCarthy
The President Promises 'As a Biden' He Won't Raise Taxes, But What's Biden's Word Worth?
Spencer Brown
MSNBC Host Complains Americans Are 'Obsessed with the Southern Border and Criminality’