Mike Pence: Heartbreaking to See a House of God in Flames 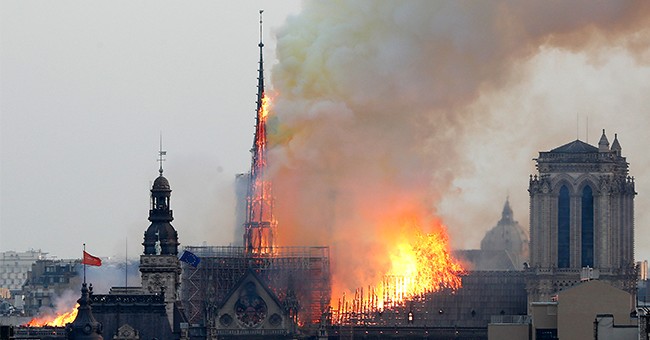 Notre Dame is an iconic symbol of faith to people all over the world – and it is heartbreaking to see a house of God in flames. Our thoughts and prayers are with the firefighters on the scene and all the people of Paris. https://t.co/5Pecbf02em

So horrible to watch the massive fire at Notre Dame Cathedral in Paris. Perhaps flying water tankers could be used to put it out. Must act quickly!

The fire is still burning into the night, leaving only the frame and front of the building behind.

French Ambassador to the U.S. Gerard Araud expressed sorrow, a feeling so many watching share.

We are crying with you.

"I think what's so emotional right now is I can hear people in the streets singing. They're singing and praying and watching this billowing fire continue to persist," said @Victoria_WDBJ7, who is staying nearby the Notre Dame https://t.co/Q2Pt0kHC83 pic.twitter.com/AJ2QVtU3Lg

Fire fighters are working now to save what's left of the building. The frame, roof and pire of the cathedral have been completely consumed by flames.