John Brennan Tries to Explain: It's Not My Fault I Called Trump a Russian Traitor, I Got Bad Information 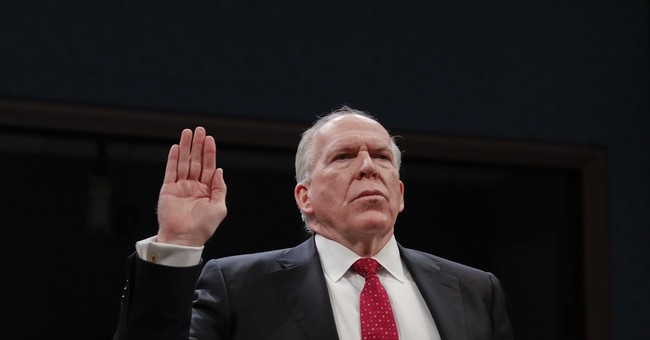 Former CIA Director John Brennan is doing his best to explain why he perpetuated a hoax about collusion between the Trump campaign and Russia for the past two years. He isn't doing a very good job, however.

Brennan on MSNBC: Well, I don't know if I received bad information but I think I suspected there was more than there actually was. I am relieved that it's been determined there was not a criminal conspiracy with the Russian government over our election. pic.twitter.com/V2D7Cg9KsV

He tweeted this just five days ago:

Hmmm...your bizarre tweets and recent temper tantrums reveal your panic over the likelihood the Special Counsel will soon further complicate your life, putting your political & financial future in jeopardy. Fortunately, Lady Justice does not do NDAs. https://t.co/ktFRevlOcd

Brennan didn't only push a conspiracy theory, he called President Trump a traitor.

He also said President Trump was a danger to the nation.

Brennan was in charge of the most powerful intelligence agency in the world and his excuse today is that he got bad information. Pretty incredible.

Newsom Seeks to Delete Law That Makes it a Crime to Kill a Baby After It's Born
Townhall
Financial wiz says the drop in the stock market 'literally means nothing' to the average American
Twitchy
Jill Biden's Latest Fashion Disaster Has People Talking, but It Shows a Deeper Issue
Redstate
Parents and Students Protest Transgender Teacher With Huge Fake Breasts
PJ Media