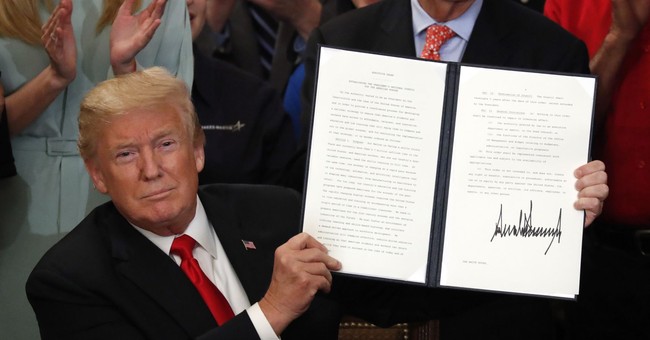 "We reject oppressive speech codes, censorship, political correctness, and every other attempt by the hard left to stop people from challenging ridiculous and dangerous ideas. These ideas are dangerous. Instead, we believe in free speech, including online and including on campus," Trump released in a statement.

We are here today to take historic action to defend American Students and American Values. In a few moments, I will be signing an Executive Order to protect FREE SPEECH on College Campuses.https://t.co/gFFnSl1bEF

"Agencies will take appropriate steps to ensure that college and university campuses are places of free thought and debate. The Trump Administration believes that public schools should fulfill their obligation to uphold the First Amendment and private schools should comply with their stated institutional policies regarding free speech," the White House released. "The Trump Administration believes that schools should promote free speech and be transparent about their speech policies."

The White House invited a number of students from Young America's Foundation [YAF], Campus Reform, Turning Point USA, The Leadership Institute and other organizations to attend the signing.

For years YAF has issued lawsuits against universities for infringing on the free speech rights of students.

“Since his inauguration, President Trump and his administration have shown significant interest and support for the work of Young America’s Foundation and our student activists,” YAF Spokesman Spencer Brown released in a statement. “We are especially optimistic and honored to have the President building upon the work of Young America’s Foundation to protect First Amendment rights on campuses across the nation.”

YAFers on their way to the White House as @POTUS @realDonaldTrump recognizes the free speech victories won by these bold YAF activists. #WinWithYAF pic.twitter.com/ZPhANN5KKD

And per source, Charlie Kirk, president of @TPUSA, will be there to watch. https://t.co/efZQ9rbsir

The Left should be the MOST supportive of Trump's Executive Order on Free Speech.

My new op-ed up on the @sfchronicle.https://t.co/BuxvKDx9OR