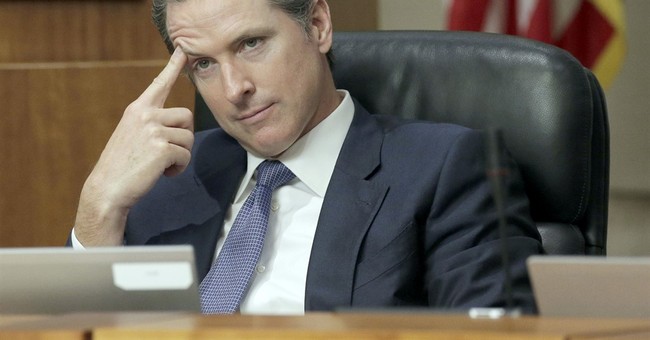 California Governor Gavin Newsom isn't happy President Trump is holding him accountable and liable for $3.5 billion in federal taxpayer funds after the state's "green" fast train project crashed and burned. From the AP:

The Trump administration said Tuesday that it plans to cancel $929 million awarded to California’s high-speed rail project and wants the state to return an additional $2.5 billion that it has already spent.

The U.S. Department of Transportation announcement follows through on President Donald Trump’s threats to claw back $3.5 billion that the federal government gave to California to build a bullet train between Los Angeles and San Francisco.

Gov. Gavin Newsom vowed a fight to keep the money and said the move was in response to California again suing the administration , this time over Trump’s emergency declaration to pay for a wall along the U.S.-Mexico border.

“This is clear political retribution by President Trump, and we won’t sit idly by,” Newsom said in a statement. “This is California’s money, and we are going to fight for it.”

Over the past week, President Trump has been hammering the failed project and using it as an example to bolster opposition to the Democrat's "Green New Deal."

California now wants to scale back their already failed “fast train” project by substantially shortening the distance so that it no longer goes from L.A. to San Francisco. A different deal and record cost overruns. Send the Federal Government back the Billions of Dollars WASTED!

The failed Fast Train project in California, where the cost overruns are becoming world record setting, is hundreds of times more expensive than the desperately needed Wall!

California has been forced to cancel the massive bullet train project after having spent and wasted many billions of dollars. They owe the Federal Government three and a half billion dollars. We want that money back now. Whole project is a “green” disaster!