Flashback: When President George H.W. Bush Jumped Out of a Helicopter For His 90th Birthday 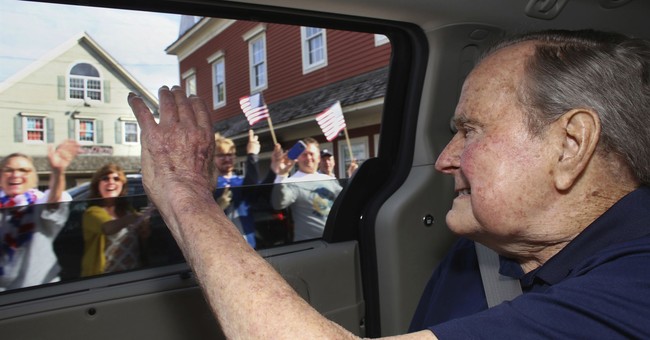 President George H.W. Bush will lie in state at the U.S. Capitol building this week. Friends and family will pay their final respects at a funeral in Houston on Thursday.

Bush's passing came at the age of 94 and he certainly lived life to the fullest. For his 85th birthday, Bush jumped out of an airplane, proving being young at heart is alive and well.

Just five years ago for his 90th birthday, he parachuted out of a helicopter.

What was it like to skydive with President Geroge H.W. Bush?

"It was the highlight of my life," says retired Sergeant Mike Elliott. "He definitely sent a message out to all mature people that you can still live your life. Age is not going to stop you" https://t.co/ot1kbduJGi pic.twitter.com/OwBq8o2qW7

Sgt. 1st Class Mike Elliott on why #GeorgeHWBush wanted to skydive a second time: "He wanted to make sure he did it right. He's a perfectionist."

Elliott said Bush absolutely was planning to jump again for his 95th.

May we all be so brave. Rest in peace, Mr. President.